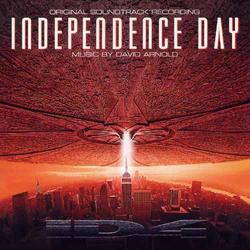 With groundbreaking special effects (at the time) and one of the biggest large-scale science fiction films made to date, 1996's Independence Day became an instant blockbuster and helped push Will Smith's acting career into the limelight. David Arnold's score perfectly reflects the epic scale and patriotic theme of the film and is relentless in its powerful and bold action, taking a similar approach to that of John Debney for Cutthroat Island the year before. The dark, suspenseful music for the aliens' approach ("The Darkest Day") builds the tension well with a choir backing the brass and staccato motif in the French horns. Some slower moments in the film gave Arnold the chance to add a solo trumpet and choir, which is a nice effect for the tragedy that occurs on July 4th ("Aftermath" and "El Toro Destroyed").

With "International Code," a bold brass theme and male choir crescendo into the last half of the album and doesn't back down. "President's Speech" is a somewhat clichéd musical accompaniment to Bill Pullman's rousing speech. But "The Day We Fight Back" finally introduces us to the best theme of the score, the victory theme. The explosive performance of this brass theme will make anyone notice. The theme reprises in "Jolly Roger" and then is given a full treatment in the "End Titles." The End Titles are actually the highlight of the album, a nine-minute suite of all the themes from the film, starting and closing with the victory theme backed by a rhythmic trumpet motif. Independence Day is often reminiscent of some of Williams' patriotic writing and is a great listen for fans of powerful orchestral action music.