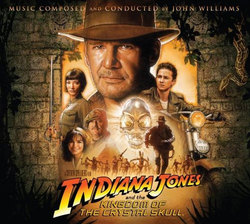 Indiana Jones and the Kingdom of the Crystal Skull

Review: Indiana Jones and the Kingdom of the Crystal Skull

For most, the expectation of having \"new\" John Williams Indy music after an almost twenty year hiatus, leaves people with a sense of, \"yeah, whatever.\" However, for fans, the music could not come soon enough, or at a better time. With summer 2008 shaping up to be a film blockbuster summer, with superheroes and sci-fi battling for the wallets and purse strings of the movie going public, Steven Spielberg and George Lucas, progenitors of the Indiana Jones franchise, dip back in that well, just before Harrison Ford begins collecting Social Security. For a musical franchise that is almost 30 years old, John Williams comes to bat with a score that draws on the familiar while introducing just enough new themes and motifs to make it interesting and worthwhile.

Admittedly, while not part of the press that gets to shuttle off to the south of France for Cannes, I\'m awaiting my chance in line on Wednesday night for a midnight showing of the film, I\'m presenting, here, an interpretation of the strengths and/or failings of Williams\' score based on itself and those the preceded it. And, for those, who speak of returning to the familiar, like an old pair of comfortable shoes, we\'re treated to a slightly updated \"Raiders March\", slightly mellowed, maybe due to my ears or it\'s years as a theme, but it just feels a little \"less full\" and exciting. Granted it\'s the same melody, but maybe it\'s just the choice of how they recorded it (which, there are no indications on the album cover or in the notes about what orchestra recorded it, which is one of many faults about the packaging).

The interesting stuff begins in earnest after our opener, as we\'re introduced to the \"Call of the Crystal\", and eerie melody on flutes that harkens back to the \"Main Title : South America, 1936\" from Raiders, while not note for note, the structure is almost dead-on. It too, opened in the jungles of South America, much of which the setting for The Crystal Skull is allegedly set. A homage, of course... \"calling it in\", as some would say... well not quite, as a solo oboe takes over the melody, surrendering to the strings and low brass that have become Williams trademark device. The pace picks up with the introduction of \"The Adventures of Mutt\", which is very much a mix of string figures that is very prevalent in Williams earlier works such as Far and Away and Empire of the Sun, and was also on display for his original Harry Potter score. Splashes of the Indy fanfare on horn pop in from time to time, almost confirming some idea that the rumors of Mutt being Marion and Indy\'s \"love child\" could be true, but then again... speculation! If you could say a piece of music \"frolics\", this could be the case, hence the comparison, slightly to \"The Fighting Donelly\'s\" from Far and Away.

Of course, what would an Indiana Jones movie be without it\'s \"heavy\", this time the femme fatale is played by Cate Blanchett. Her theme, is all but the less interesting bits on the album, some what faux-Russian infused, and sounding a bit more akin to my least favorite brass bits from the latest Star Wars installments. Its short and uninteresting, the worst thing, in my opinion, for a major theme to be. \"The Snake Pit\" (...why did it have to be snakes...) brings back the woodwinds and strings fans will remember from \"The Basket Chase\" from Raiders, but not the slithering atonal measures used in the snake pit scenes from that film. But wait... is that, really... \"The Map Room\" theme from Raiders? Why yes, \"The Spell of the Skull\" starts off directly (albeit with a stronger harp overlay), just hinting that there may be something connected to the two films (besides the idol hunting in all four films), then it morphs into a more whimsical motif, with percussion rattles and bells and crescendoing strings.

I\'m expecting with \"The Journey to Akator\", that we\'ll be treated to the \"red line and photo\" overlays of the map from previous films. Williams conjures up a South American flourish, ala Jerry Goldsmith (Medicine Man) and James Horner (Vibes) for the latter half of the piece, although a little too comical in it\'s approach (so much so, I went looking for a pińata to hit afterwards). In \"A Whirl Through Academe\", is your standard chase music, with woodwind (flute and clarinet) flourishes, with string figures (crescendo and decrescendos as well as hits) punctuating the woodwinds, supposedly exciting, but not so, even with the marimbas and church bells, in so far as trying to draw on the college chase scenes from The Last Crusade. As the only track with \"quotes\" around the title on the CD, \"Return\" brings back the eerie Crystal Skull motif, this time accentuated by a solo harp (plucked quite heavily), rising to fevered strings, and then dropping to a low thundering piano rumble.

If they made a Lego playset out of it, could it be exciting? Yet \"The Jungle Chase\", which had heavy cut scenes available on the various trailers and teasers out there, brings back Mutt Williams\' theme (that \"Fighting Donnely\'s\"–esque melody from Far and Away), with cymbal hits (and in John Williams melodic parlance, is usually mirroring physical hits or confrontations on the screen) punctuating the end of the first half. The second half, which by far, is the fastest paced piece of the album, derives a bit from \"The Belly of the Steel Beast\" from The Last Crusade, and \"The Mine Car Chase\" from Temple of Doom, with driving percussion and brass flourishes until the piece\'s final resolution. Assuming, at this point in the film, the crew, both bad guys and good guys have made it into the temple, and are well on their way to the resting place of the Crystal Skull, \"Orellana\'s Cradle\" brings the skull theme to the brass (solo trumpet) after being introduced by a glass harmonica version, transitioned by the Indy theme in the middle (as well as the end), and then to the woodwinds (bassoon)... very suspenseful stuff. You\'ll here more of that later, as well, in \"Hidden Treasure and the City of Gold\", this time with more driving cellos and violas at the end, finished by rising strings and trumpet flourishes.

Williams, with \"Grave Robbers\", I think stretches a bit too far beyond his comfort level. The percussion and low piano on display in the beginning (and returns later, along with punctuated brass), just comes across as, I\'m not quite sure how to put it, but synthetic. It\'s not very melodic, and is just a slight throw-away piece on this album. \"Secret Doors and Scorpions\" is your basic \"crawling through scary crap\" music that every John Williams fan has heard before, eerie strings, low muddled trombones and other low brass, and the \"plinky\" strings and percussion devices always used for creepy crawly things (also heard in \"Ants!\", with ratchets), of which transitions into \"Oxley\'s Dilemma\", extended by slight revisits to The Crystal Skull theme. This third quarter of the album, just seems to kind of run together, albeit, not very inspiringly so. I\'d hope, though, given Lucas\' and Spielberg\'s promise to bring some of the 1950\'s sci-fi into this film, I\'d want those ants in \"Ants!\" to be fifty foot high radioactive ants... just to keep it interesting.

Finally at the resolution portion of the album, and seemingly with the structure of all Indiana Jones films (what about cliffhangers?), \"Temple Ruins and The Secret Revealed\" brings back in the otherworldly Crystal Skull theme, repeated and repeated, transitioned to wordless choir as the apex of the piece is reached. The strings trade off here and there, punctuated by a piccolo, then into rising brass and strings, obviously to the \"big reveal\", much how Williams has done for Close Encounters and Jurassic Park in the past. A return to the Indy theme as the crew escapes almost certain doom is brought back in \"The Departure\", and then, once again, in true John Williams form, a \"savior\" motif (trust me, it\'s in a LOT of Williams\' works), with strings, brass triplets, bells and triangles, comes to the end of the piece and the film.

Of course, in all great Spielberg/Lucas/Williams collaborations, we get our other big hunk of music in the \"Finale\" encompassing not only the \"Raiders Theme\" but all major melodies and other themes introduced throughout the film. There are plenty of fine examples outside of these collaborations (as all three or just pairing composer and director), but the Indiana Jones ones always stand out, and at over nine minutes, there\'s a lot to take in. The piece opens up with a very nice take on \"Marion\'s Theme\" from Raiders, with a slight twist before jumping into the \"Raiders March\", followed by a more classic romantically styled take \"Irina\'s Theme\". It\'s kind of like having all your best friends in the film revisit you one last time before you waltz out the door, trying not to step on the spilled soda and popcorn on the floor, and trying to see who was credited as snake or insect wrangler. The second half of the finale, once you\'ve made it to the main aisle in the theater, begins to wrap things up with \"A Whirl Through Academe\" again and then back into \"Marion\'s Theme\", this time with, what sounds as a \"pushed\" string section, trying to drag the piece along, and finally concluding again with the famous transition of that theme back into a more triumphant and alternate brass take on the \"Raiders March\".

Overall, as the album goes, it succeeds as a score for an Indiana Jones film. While I admittedly still need to catch the film later this week, this part of the movie does stick well to the tried and true formula. While not having as many memorable themes, and those that were new, did seem somewhat derivative, they were done, in my opinion, with a purpose. You\'re trying to encompass an almost 30 year legacy of filmed adventures in what is supposedly Harrison Ford\'s last outing as Indiana Jones. As a possible launching pad to a new franchise, as some have expected, I\'d have to say, wait and see, but I\'m surely not disappointed, and I doubt, you as a listener will be either.