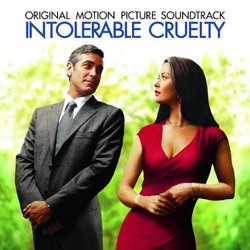 I love the films of the Coen brothers, and I love the music of Carter Burwell. Whenever I hear about a new Coen brothers film that's going into production or coming out, I always look forward to not only a creative film, but a creative score as well. Burwell has scored all ten of the Coen brothers' films, and I have to say that when I heard about Intolerable Cruelty, I was excited to see what he would do with the material given him.

Surprisingly, Burwell's score from the film is kept quite brief on the album, clouded out by the mainstream songs used in the movie. I like the songs, for the most part. The choices used are as eclectic as the Coen's films - Elvis Presley, Colin Linden, Simon & Garfunkel, Tom Jones, and Chuck Mangione, to name a few. However, I found myself disappointed with the lack of score by Burwell. One of the biggest disappointments is the omission of the music for the hilarious courtroom scene involving Heinz, the Baron Krauss von Espy. The scene is deliriously funny in and of itself, but the music provided by Burwell only adds to the courtroom lunacy. "Intolerable Mambo" is a great, upbeat cue with dark undertones, and is reprised in "Hanky Panky Choo Choo." The real joy of Burwell's score, though, is the main love theme found in tracks 7, 9, and 14. Wispy, fluffy, powerful, and overly dramatic, it fits perfectly with the relationship between George Clooney and Catherine Zeta-Jones, and is in step with the attitude of the Coens. It's also a rather pretty theme - one that I don't tire easily of - easily one of the best love themes I've heard for a while.

All in all, the Intolerable Cruelty album is a fun listening experience, and I recommend it to anyone who likes Carter Burwell, or eclectic collections of music for that matter. I think, however, that the album would have been more fun if more of Burwell's score was included. As Heinz, the Baron Krauss von Espy might say, "C'est la vie."