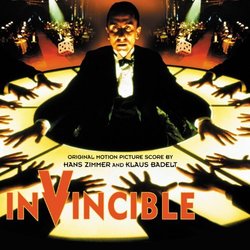 Invincible tells the true story of Zishe Breitbart, a Polish Jew from a humble shtetl who was touted as the world's strongest man.  He was brought to Berlin to perform in a nightclub run by the self proclaimed clairvoyant Erik-Jan Hanussen (played by Roth).  Zishe becomes increasingly resentful of having to perform for Nazis and finally cannot take it any more.  This dark cautionary tale avoids sentimentalism, and sometimes feels a little too eccentric for its own good.  But overall, it works.

As indicated, the soundtrack is surprisingly conventional for a Herzog film.  But this is certainly not a criticism.  Zimmer and Badelt produce a stirring, primarily orchestral soundtrack which is evocative and moving.  Each piece is both rousing yet somehow gentle and, though it may not conjure every scene in the movie, it is pleasant to listen to.  There are some nice vocal accompaniments to certain pieces which add the feeling of the era effectively.

The main criticism of the score would be that it lacks strong motifs.  It does not feel like a unified work as much as a series of pretty pieces.  This is not a disaster, but it is a failure that does hurt the film to a degree.  To put it succinctly, it is more good classical and big band music than good soundtrack music.

This is a strong collection of music which I would recommend for fans of the film and, perhaps, Wagner fans, as it evokes that feeling to a degree.  Those wanting a John Williams score may not find it quite to their liking.