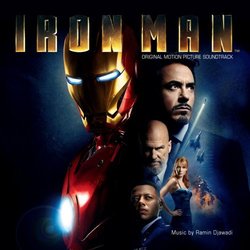 Let me start off by saying, Ramin Djawadi\'s score for Iron Man makes me grateful for surround sound, because if you don\'t have one, you are missing out on some rockin\', rollin\' turbo charged good times. I hope for the sake of the franchise and the coming sequels that Djawadi will be tapped again to provide music because this score is without even the slightest doubt worth every penny.

I remember seeing the trailers and hearing AC/DC thinking, \"Oh man this is going to be awesome!\" And I was right, Robert Downey Jr. has done some of his best work, he plays Stark well, and makes it believable. He has made a complete turn around in his film career and I\'m happy to say that he\'s done a great job of it, but back to the music.

For a film about a man in a metal suit, one would only expect the score to be a romp of power, and adrenaline, and if it\'s anything less than that, I must have got the wrong disc. There are three tracks that I want to point out how good this album is, the first is \"Merchant of Death\".

With \"Merchant of Death\" we are shown what the album will be filled with, rocking drums that will have you air drumming in no time, and a lot of guitar that will have you pretending you have one foot on an imaginary monitor and are welling out a heavy jam.

Djawadi puts out track after track of a rocking score, this is the soundtrack where you wish your stereo went to 11. I wish I could say more about \"Merchant of Death\" but the whole album just makes me excited every time I listen to it. Its a kick to the head for any lover of rock music and well put together scores for the movies.

But even though the album is filled with heavy guitar and ear-drum bursting percussion, Djawadi knows when a soft touch is needed and he gives that to the film in the form of a cue called, \"Extra Dry, Extra Olives\". With this cue, its one of the tender moments between Tony Stark and Pepper Potts.

Djawadi accomplishes the delicacy of the cue with a lack of brass, the whole piece is made up of strings, a few wood winds and light percussion. The track really is smooth and tender and you can tell from watching the movie and listening to the track that it captured the moment between Stark and Potts to the last detail.

I feel the culmination of having an orchestra and a power quartet in a soundtrack comes perfectly together on the track, \"Gulmira\". This is the track that makes the album so good. It\'s a great orchestral cue and then a great power quartet cue. The interplay of the two forces at work just make for a roaring good time. Every time this track comes on I turn my volume up as loud as I can handle it and put it on repeat and just rock out.

The score for this movie is just so good, I really don\'t understand why they put music on the soundtrack not by Djawadi. He has done for Iron Man what Badelt and Zimmer did for the Pirates of the Caribbean movies, gave fantastic movies over the top scores that just made the films ten times better. If Djawadi doesn\'t come back for the next two sequels for Iron Man I will be thoroughly disappointed with the studio. There\'s only really one word for this album. Buy.