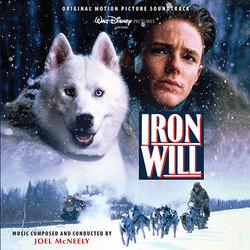 Intrada's latest release features Joel McNeely's stunning adventure score to the 1994 Walt Disney film Iron Will. The album released at the time of the film's theatrical run contained about 30 minutes of McNeely's score. This new release more than doubles that length, expanding upon the original program and creating a richer, more varied experience of this epic score. Consisting of powerful themes and outdoor symphonic splendor, Iron Will is a passionate work the likes of which one rarely hears in today's motion pictures.

The score is anchored around a four-note whistle motif, a key element that threads its way through the story. In early scenes, father Jack Stoneman (John Terry) uses this tune to spur his sled dogs to action, usually with the aid of a small hand-carved pipe. When Stoneman dies in a freak sledding accident, his son, Will (Mackenzie Astin), takes up the pipe and the tune—relying on it to communicate with lead dog Gus. Will leaves his mother (Penelope Windust) and sets out for Winnipeg to enter a race, hoping to use the prize money to attend college and save the family farm. Will's fortunes rise and fall over the long trek, and he encounters many dangers and near disasters. Yet in spite of numerous challenges, Will becomes a folk hero—and his four-note tune becomes part of the legend, for when he falters just before the finish line, Will is roused to victory by the unison whistling of the crowd.

For Joel McNeely, Iron Will was the start of an enduring relationship with the studio. He later scored Squanto: A Warrior's Tale, Jungle Book 2: Mowgli's Reunion, Peter Pan 2: Return to Never Land, Cinderella 3, and numerous entries in the popular Tinker Bell franchise. For the rest of the world, everyone started receiving McNeely's gift for warm, spirited and often soaring music, of which Iron Will is a testament.