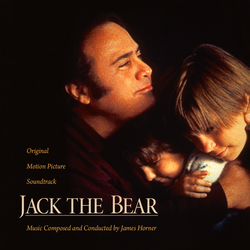 La-La Land Records, 20th Century Fox, and Fox Music present a remastered and expanded reissue of renowned composer James Horner's original score from the 1993 feature film Jack the Bear, starring Danny DeVito and directed by Marshall Herkskovitz. Mr. Horner creates another notable work, providing a beautiful and heartwarming musical blanket that supports and nourishes this thoughtful melodrama about the challenges of growing up in a dysfunctional family during the 1970's. Produced by Nick Redman, Associate Produced by Mike Matessino, Co-Produced and Edited by Neil S. Bulk and mastered by Dan Hersch, this remastered re-issue is expanded over the previous, out-of-print edition with some never-before-released music. The exclusive, in-depth liner notes are by writer Jeff Bond and include new comments from director Herkskovitz from and interview conducted by writer Tim Grieving. This is a special limited edition CD release of 1500 units. The sharp art design is by Jim Titus.