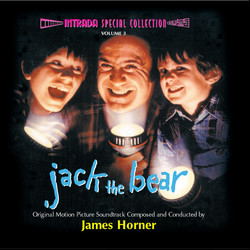 Jack the Bear is the story about John Leary (Danny DeVito) who is left to raise his two sons alone when his wife is killed in a car wreck.  After a slew of career mishaps, Leary begins a downward spiral into alcoholism, bad parenting, and even revenge.  In the end, though, the heart of the film is about the relationships between Leary and his two sons, Jack and Dylan.  Composer James Horner provided the score to Jack the Bear, and while the melodies are enriching and meaningful, the score itself feels like "just another" Horner score.

A solo piano starts out the "Main Title", and is quickly overtaken by a flute and small orchestral accompaniment performing the main theme.  It's a sentimental theme, and does a wonderful job of evoking feelings of warmth and family.  A darker, more ominous theme makes a brief appearance here, played on a bass harmonica, but then the main melody returns, and the cue ends on a lighter note.  A secondary more meaningful theme is hinted at throughout the first few cues, but never fully materializes until "Flashback". This overly tender piano-based melody is sad and filled with emotional depth.

The dark elements in the score tend to be of the low brooding sort ("Dead Dog", "Dylan's Gone"), and the occasional dissonant outburst ("Norman Attacks").  The score was recorded with a small ensemble, and while that adds to the intimacy of the music, it also detracts from the effectiveness as a purely musical listen.  It sounded as though synth strings were used throughout the score, and while that might have worked well for the film itself, when you're listening to the music on this album, it stands out like a sore thumb.  But as I mentioned, that only occurs when a larger sound is needed.  For the most part, this score stays small and gentle.

The longest cue on the album, "Norman Attacks" runs over 11-minutes in length, and seemed to rehash much of the music heard prior to it.  But around the 5-minute mark, things start to turn darker, and when the "evil" theme is reprised (again with that great bass harmonica), the cue takes on a truly malicious edge.  Lots of dissonance, low end piano rumbling, and string percussion heighten the suspense.  Sadly, though, the effectiveness of this cue also suffers from the use of synth instruments.  "Resolution & End Title" is a beautiful capper to the album, repeating the two main themes, and ending with a solo violin (where the score opened with a solo piano).

Stylistically, this score is "pure Horner".  He uses many of the same orchestral devices that he's known for, and critics of his work will no doubt feel that he's not doing anything special on this album.  Unfortunately, I would have to agree in part.  Aside from the two major themes (which are quite nice), and the darker "evil" theme, there's just not a lot to this album to prompt me to listen to it more than a few times.  It's certainly a temperate score, filled with all the right emotion and sentimentality to evoke the proper feelings.  But it just felt average for the most part.  Jack the Bear is released through Intrada Records as part of their Special Collection series, and is available at http://www.intrada.com/.