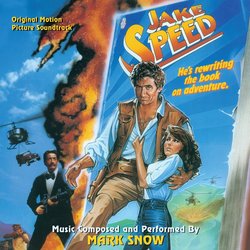 Jake Speed is an early feature film score for Mark Snow. The composer himself will tell you that he's still not sure how he got the call for the project. Snow had just finished putting together an electronic music studio in his home and this became the first score he composed and produced in the new workroom. An electronic score, it was conceived and performed on the Synclavier, an early synthesizer and sampler that allowed Snow to input a variety of sounds and manipulate them in a myriad of different ways. The main instrumental texture in the score comes from pan pipes, augmented with bass guitar and some percussion elements.