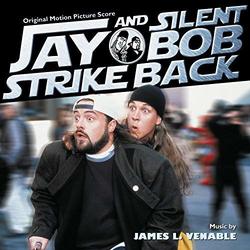 You know that old showbiz adage "Death is easy, comedy is hard"? Well, that goes double for scoring a comedy. Frankly, I can't imagine a more thankless musical chore for a composer than the one set before James L. Venable in Kevin Smith's Jay And Silent Bob Strike Back. Among a million other things, Venable ("Clerks: The Animated Series") has to keep the mood light, has to impart some manner of dignity and class to Smith's hit-and-miss punch lines, has to ape - but not copy - bits and pieces of various other scores so that the film's numerous Hollywood references can play, and has to somehow make it all work as a somewhat cohesive whole. Not to mention the age-old debate as to whether or not music can ever actually be construed as "funny" at all. (Personally, I think comedy scores should be a lot like Leslie Nielson in The Naked Gun - the constant straight man, something Elmer Bernstein knew to do in Airplane!.) The amazing thing about Venable's Jay And Silent Bob score is not only that he manages to pull such a tall order off reasonably well, but that soundtrack fans are also treated to a forty minute legitimate CD release of his efforts from Varese Sarabande. What a Golden Age we live in, huh?

It's an everything-but-the-kitchen-sink score. And most of the cues here are on the short side, obviously. (Not much room for thematic development when you're squeezing music to fit between so many of Smith's self-proclaimed "dick and fart jokes".) You've got the bouncy orchestral hijinks of cues such as "A Long Time Ago" and "Holden's Pad". Then there's the added ingredient of heavy slap bass work in cues like "Eighties Style" and "Ladies, Ladies, Ladies" because, as "Seinfeld" unforgettably showed us, slap bass is damned funny. "Devil Devil" throws some heavy metal guitar into the fray, and "Angel" gives us a heavenly choir that will later directly comment on the action at hand. Big funny.

Another key ingredient of the score is an homage-of-sorts to the techno aspects of movies like The Matrix and video games like Mortal Kombat, used to underscore the bevy of leather-clad bisexual caricatures that Smith unsuccessfully tries to simultaneously pass off as both comic book whack material and an ironic commentary on comic book whack material. Cues like "Time To Shine" and "Chronic Vs. Cocknocker" (did I really just type that?) are effective in conveying the required drum machines and bass thump.

"Justy's Monkey" is a piece of loping and goofy simian scoring, and "Jay And Silent Bob Flee" gives us the inevitable blistering banjo solo. Additionally, some Elfman-esque orchestral oom-pah pops up in the "Running Around Miramax Suite", confirming that apparently this style of music is the only way to ever score some jackass breaking into a movie studio and stirring up trouble.

I know I sound like I don't like this movie. Au contraire, I found it hilarious in a perpetually fourteen-year-old kind of way that I am loath to admit freely. And if James L. Venable's score is relatively transparent in the movie itself, on Varese's CD his ingenuity really shines through. In the final analysis, though, Kevin Smith is hardly a master comedian. But the sheer chutzpah it took to give "where-the-hell-am-I" comic gem Jason Mewes his own star vehicle is to be commended. I could probably watch that guy do his taxes and find myself rolling on the floor, laughing, completely ashamed of myself for doing so.