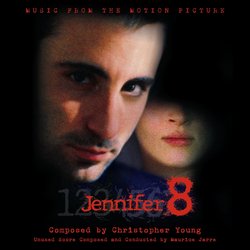 We decided to skip parts 1-7 and just release Christopher Young's breakthrough score to the Paramount Picture thriller Jennifer 8 instead. ;)

This is the score that really put Mr. Young on the map in terms of big studio pics. However, it almost did not happen. Before Mr. Young was brought on board, Maurice Jarre was hired to score the film. He scored about 75% of the movie before his score was tossed and replaced by Christopher Young's haunting and thrilling music.

This is a very unique release—Mr. Young wanted to "revisit" his career making score and has culled together a great album of his best music featured in the film. Clocking in around 48 minutes this brooding and elegant score will make the hair on the back of your neck stand up while you sit in awe and listen to how beautiful the melodies play out. If you had the previous Milan release and loved it, you will be even more impressed by this longer and more complicated version.

Disc 2 features everything Maurice Jarre recorded for the film—about 40 minutes of music, a collection of orchestral and synth music very much in the style of his works for Ghost and Witness.

This 2 disc set is a fascinating look inside two very different film scores to the same film. Liner note author Jeff Bond interviews writer/director Bruce Robinson about the two scores and gets insightful comments from composer Christopher Young. Dan Goldwasser's art direction tops it all off.