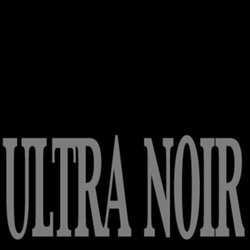 I don't really know how to begin reviewing Ultra Noir. Is it supposed to be "music from the best noir films" or "the best music from noir films"? Well, according to Milan Records, Ultra Noir is "a compilation of classical themes from some of the finest from the film noir genre." Okay then, let the bitching commence: not a single track from The Maltese Falcon? Not a single Fritz Lang movie represented? Instead we get tracks from Jennifer 8 and Blink. Blink? Blink is counted among "some of the finest from the film noir genre"? I'm not sure it even counts as film noir at all. There's more to noir than mere murder and suspense. Well, you can look over the track listing above and further ponder the mystery of the song selection for this compilation.

The first tracks start off on the right foot: John Ottman's theme from The Usual Suspects welcomes us to the world of noir with a simple piano (a piano you will soon come to hate by the end of the disc) and melancholy strings. As this comes from a relatively recent, and well known, movie it is especially well suited as the entree. Then as a wonderful counterpoint we get clobbered with Laura's nostalgia-dripping, lush, melodramatic theme that simply screams out "golden age of noir!"

Then the third track comes on. My first thought was, "Is this from Beverly Hills Cop?" Actually it is from Body Double, but both movies are from 1984. It is too electronic, too upbeat, too positive, with some Enya-like moaning on top of it all. There is no way that Marlowe could solve a murder with this playing in the background. It would make a nice accompaniment to a moonlit walk along the beach, however.

Next come tracks from three great movies, climaxing with Marlowe's theme from Farewell My Lovely. This is the most quintessential noir song on the disc. With iconic, laconic jazz piano and brass you can imagine the noir protagonist drowning his sorrow in a bar because the girl he loved, who betrayed him, but took the bullet meant for him, is now dead. In the opening moments of the Marlowe theme we hear the slow, solitary piano that will be repeated ad infinitum in the next several tracks. They aren't bad per se, but you begin to feel like you're hearing the same track over and over again. Emma's Eyes sounds like a variation on Blood Simple. The Jennifer 8 and Copycat tracks sound too similar to be placed back to back - both were composed by Christopher Young. The Angler reeks too much of the countryside and folk music to feel truly at home the dirty, grimy cities where darkest noir dwells. We are rescued from all of this mediocrity by Jerry Goldsmith's entry from L.A. Confidential which reminds us of North by Northwest's "Prelude" and that noir has a place for something other than slow, lonely piano pieces.

The quirky closing track, "Black Flowers", just serves as further reminder that noir films, and their music, can comfortably span a much broader selection than the one presented on this disc. But the biggest failing of Ultra Noir isn't the music they chose to put on it, it is the music left off. So many of noir's greatest films come from an era whose film scores are difficult, if not impossible, to find. The inclusion of tracks from indisputably great noir films would not only be truer to the title of this disc, it would be an added attraction not only for fans of the genre for anyone interested in film scores.