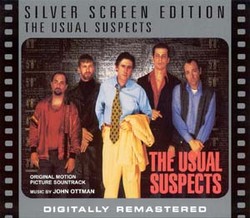 The Usual Suspects is now referred to as a mid-90\'s independent touchstone film, but at the time it was more of a surprise for what it wasn\'t. It wasn\'t some cocky young filmmaker\'s attempt to rehash Pulp Fiction. It wasn\'t hip. There weren\'t any pop culture references and not a single 70\'s song in sight. Now granted, the movie was made at the same time as Pulp Fiction, but plenty of this could have been forced into the movie after the fact. Suspects was an intricate, moody and uniquely cinematic fusion of 1970\'s filmmakers, if Spielberg had ever made an edgy caper thriller with Sidney Lumet. It placed director Bryan Singer firmly on the map and gave us one of the most impressive composer debuts of the 1990\'s.

The uniqueness of John Ottman\'s dual role as editor/composer is how he manages to keep both jobs separate. Ottman himself says that he edits first and then composes the music second in reaction to the requirements of the editing and is thus is more concerned about how the score works in the film. This makes sense, because what he is best at is timing. Unlike most composers of his generation, he is masterful at precise shifts in mood and elegant transitions.

This was a low budget movie. In the strings and horns sections, the limits of the small orchestra are noticeable in big action cues ("Getting On Board", "The Garage"). Even then, these tracks are involving and well composed. This is one of the trademark scores to illustrate how to overcome budgeting limitations with smart orchestration. Most of the score is low key with grand bursts of romantic orchestra ("The Greatest Trick" and "Casing the Boat"). In "Payback Time" the strings builds in anticipation (with accenting horns) to a moment of lingering stillness of tiptoeing strings and woodblocks which flow into a grand orchestral statement. These moments of contrast give the score great scale.

There have been mutterings over the years about Ottman\'s penchant of referencing John Williams. Ottman has admitted to this plenty of times and you see it in "The Arrests" and "New York\'s Finest", which use the same staccato percussive rhythms of JFK\'s "The Conspirators." There\'s also some fragments of Sneakers as well in the "Verbal Kint" theme with a soprano sax solo as the theme. These references are in technique but not in direct melodic quotes. It is a wise appropriation, because Ottman cleverly uses this instrumentation throughout the score and it unites the movie, giving grandeur to such a small production.

For a thriller, the album is very well rounded. The title theme ("Main Theme", "It Was Beautiful", "The Water") has the trademark soulful melancholy that would become Ottman\'s signature for the rest of the 90\'s. In contrast, Ottman used the album to showcase his skills at striking moments of pure horror ("The Faces Of His Family"), mystery ("The Story Begins" and "Kobayashi\'s Domain") and my personal favorite of us, his slowly building suspense cues ("The Plan Begins").

This was such a strong score that it would take X2: X-Men United and collaborator Bryan Singer to help Ottman out of the mold eight years later. That\'s how long of shadow the music casts. The album is the same selection that came out in time for the movie\'s release, only now re-mastered (and it does sound good). The one bonus track is a 15-minute interview, which has a variety of candid comments from Ottman about the movie, his influences and his opinions on the industry today. For grumblers about his modern superhero scores (which I enjoy immensely), it\'s time to go back and revisit the man\'s roots. The Usual Suspects still holds up as one of the best independent scores of the 1990\'s.