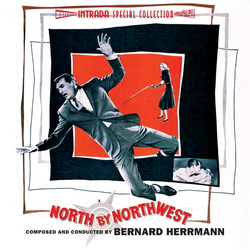 The 1959 Alfred Hitchock film North by Northwest features one of the most famous Bernard Herrmann scores from the Hitchcock/Herrmann collaboration. The score is no stranger to being on record, with highlights recorded and even two full album rerecordings available. Even the original tracks had been previously released in 1995. What separates this release from the pack is the dramatically superior sound quality, making this the definitive release of the original soundtrack. It's the final word on a world-class, colorful score in a release featuring classic artwork from the film's original campaign.

As collectors know from the 1995 Rhino CD of North by Northwest, the cues containing Bernard Herrmann's magnificent "Overture—Main Title" and related action pieces suffered some deterioration. In 1999, the 35mm masters were retransferred by Chace Productions Inc. for a Warner Home Video DVD restoration, yielding significantly better audio results than the previous transfer done in the early 90s. This provided Intrada with access to much better sources to reassemble and present the score in its best form yet.

North By Northwest was the fifth feature film collaboration between Alfred Hitchcock and Bernard Herrmann. The score can be broken down into three broad areas: the main title and its reprises during action sequences; the slowly evolving love theme which seems to stall in neutral throughout much of the picture; and numerous suspense cues which keep the audience guessing about the direction the story is taking. The "Overture—Main Title" is one of Herrmann's most engrossing main titles. Singularly lacking a melody, it derives its power from the conflict created by the juxtaposition of three simple ideas: a whirling, arpeggiated 6/8 figure; a hammering, insistent motif in 3/4 time; and a two-measure figure treated sequentially. The tension between the changing meters and the two key centers (about as far apart, harmonically speaking, as one can get) keeps the listener disoriented throughout and provides an unforgettable anchor to the score.