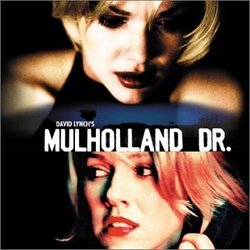 Some directors have a signature, not only with their visual style, but through the sound in their movies.  The main contributor to the latter is the music composer, and that's why many top-of-the-line directors team up with the same composer over and over.  Such is the case with David Lynch and Angelo Badalamenti, whose oddly ominous yet equally melodramatic music has graced many of Lynch's finest works, including Twin Peaks, Lost Highway, and now, Mulholland Drive.  Mulholland Drive is a film that takes us through several layers of "reality" as a young actress befriends a beautiful amnesiac, but then we watch as the roles reverse and the story soon turns in on itself.  Such an unconventional film calls for an unconventional score, and that's exactly what we get.

The soundtrack for Mulholland Drive is an eclectic mix of oldies, big band music, atmospheric soundscapes, and darker, harder rock.  Each piece is chosen to rightfully enhance each scene in its own way.  Often, Lynch's visuals are vague or even deceptive, and it is the music that guides the emotional thread of the scene.  This is never more true than with "Llorando," a Spanish version of Roy Orbison's "Crying."  One almost thinks Lynch has gone soft upon hearing this beautiful song, until he throws in a punch line to the scene that turns it around.  The oldies and big band provide a sentimentality to the film that belies the harshness underneath.  The atmospheric pieces are dark, ominous, and deeply disturbing, perfect for the scenes they are in.  Lynch is painting a picture of Hollywood that is both hopeful and desperate, shallow and rich, beautiful and very, very dark.  With his vast arsenal of styles, Badalamenti serves the film well.

Though the soundtrack is effective, that doesn't mean it is flawless.  What makes it effective as a true movie soundtrack detracts from it as an album to listen to. This array of sounds creates more of a roadmap of the movie than a standard linear listening experience.  It doesn't really get you "in the mood" so much as strongly evoke the intense imagery and emotion of the individual scenes.  Also, while watching the movie, this reviewer felt like the soundtrack was a rehash of earlier Lynch- Badalamenti collaborations, and was disappointed at how it breaks very little new ground.  Upon hearing it again, I feel the soundtrack stands on its own at least to a degree, but it is still not as daring and innovative as what we have come to expect from this dangerous duo.

In conclusion, this is a powerful and effective soundtrack that is much better heard while accompanying the picture than just listening to it at home (unless, of course, that home is an insane asylum).  For those who want a pleasurable listening experience, this album isn't for you.  For those who want to recall the film, or Lynch films in general for that matter, it is a must.