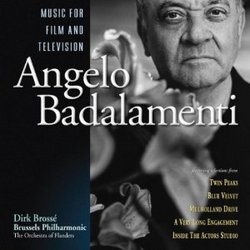 Angelo Badalamenti is the composer of some of the most beautiful and evocative film music of recent times. Most famous for his haunting and hypnotic music for such David Lynch productions as Twin Peaks, Blue Velvet and Mulholland Drive, Badalamenti's soundtracks have been best-sellers. The composer's theme and music for Bravo TV's Inside The Actors Studio has similarly become iconic.

A special tribute concert was performed to honor Angelo Badalamenti at the 2009 Ghent International Film Festival and, in separate recording sessions, the concert program was recorded with conductor Dirk Brossé.

The collection also includes a couple of very special pieces. The entrancing song "Who Will Take My Dreams Away" was co-written with singer Marianne Faithfull, who sings on this recording. Badalamenti also composed the music for the lighting of the Olympic torch at the Barcelona 1992 Summer Olympic Games and this rarity also appears here.

Angelo Badalamenti: Music For Film and Television is an outstanding collection of the composer's best work.