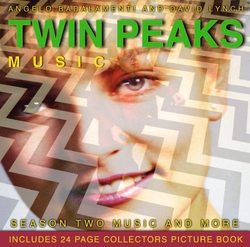 Angelo Badalamenti\'s pivotal score to David Lynch\'s off-beat cult television show "Twin Peaks" not only helped set the tone of the film, but it created a sound so unique and memorable that the two can never be separated. A soundtrack release in the early 1990s had many of the show\'s primary themes released, as well as a few songs by Julee Cruise, whose ethereal voice added so much to the vibe of the musical soundscape. Now, 17 years later, and just in time for the DVD release of the complete series, Angelo Badalamenti and David Lynch have released (on Lynch\'s own record label) a new album of more music from the television series - and even some cues (reportedly) from the feature film, Twin Peaks: Fire Walk With Me.

There are three types of tracks on the album - heavily thematic cues that could be 1950s songs without lyrics, jazzy noirish cues, and synth heavy atmospheric cues that range from atonal to painfully dissonant. Bookended by two Love Theme tracks, the album immediately pulls us back into the world of Twin Peaks. Badalamenti\'s use of acoustic instruments and electronics works melodiously, in such tracks as "Shelly", "New Shoes", "Harold\'s Theme", "Audrey", and "Half Heart". The cues that work as source songs include the doo-wop inspired "High School Swing" and "Hook Rug Dance", the piano source "Hayward Boogie", the a capella "Barbershop", the almost painfully cheesy vocal song "Just You", and the BB King styled "Drug Deal Blues".

Lynch\'s own composition, "Blue Frank" is a hard-edged piece with a strong bass line that builds up in the dissonance as it progresses. Dissonance and experimental music can be interesting in context, but rarely works as a standalone listen, which makes tracks like "I\'m Hurt Bad", "Cop Beat", "Night Bells", "Laura\'s Dark Boogie" and the lengthy "Dark Mood Woods / The Red Room" interesting pieces, but less likely to get repeated play.

It\'s a pretty full album, running 71-minutes, and while it\'s a mixed bag of cues that run the full range of listenability, it is likely to satisfy most die-hard fans. Casual fans of the show will probably find more enjoyment in the original album release, which is stronger overall.