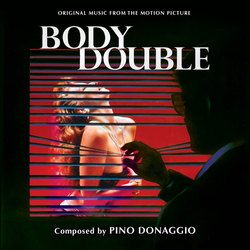 Intrada re-issues its earlier Special Collection release featuring Pino Donaggio's score to the 1984 Brian De Palma thriller Body Double. This remastered edition also features the premiere of Jonathan Elias' trailer music, which is very reminiscent of John Barry's style. No stranger to suspense and horror, Donaggio had previously scored De Palma's Dressed to Kill and Blow Out (both previously available from Intrada), providing an evocative mix of eeriness and striking lyric romanticism. Body Double opens with a smashing horror movie pastiche for scenes accompanying the shooting of a vampire movie, while laying the groundwork for some of the operatic flourishes and important thematic approaches for the rest of the film. Lyricism and tension permeate throughout, with the protagonist's claustrophobia characterized by a two-note motif pounded out by horns and heavier brass in scenes featuring his phobia-induced incapacitation. Donaggio wrote a number of long and elaborate musical cues that are not only at the forefront of the sound mix, but also feature the kind of melodic development rarely seen in movies today, resulting in one of his strongest scores.