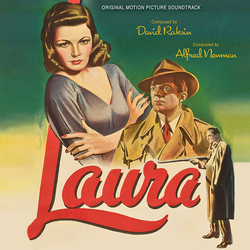 Laura—both the 1944 film and the immortal David Raksin score that supports and, in the opinion of some, lends it classic status—is the ultimate in noir-ish Hollywood glamour: a dark masterpiece that somehow transcended all the difficulties strewn along its path to production to become one of the great exemplars of the accidental artistry of a largely commercial studio system.

Laura was David Raksin's first major composing assignment and he delivered the goods, with a breathtakingly beautiful monothematic score that fits Laura like a glove. Shockingly, there were twenty best score nominations in 1944 and Laura was not one of them. But the theme and the score have endured and grown even more popular over the years. Many singers have recorded the song (with its lyric by the great Johnny Mercer), and there have been an equal number of instrumental and jazz covers—in fact, during Raksin's lifetime it was said to be the second most recorded song in history.

In tandem with the film's release on Blu-ray, we are thrilled to present for the first time on CD, the complete score for Laura. The previous CD release on Arista, which has been out of print for many years, was missing about ten minutes of cues. Additionally, what was presented was compiled into a twenty-seven minute suite with no track breaks—one long track. That release was taken from a reel-to-reel tape, but for this complete release the original elements were used.

Additionally, we include as a bonus some test demos and the entire suite from the previous release. In total, eighteen tracks of prime David Raksin, and a score that truly stands the test of time.

Laura is limited to 1000 copies only.