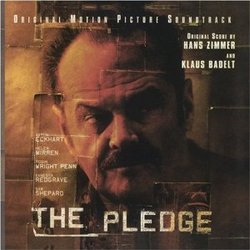 In The Pledge, director Sean Penn takes us into a strange world of paranoia where nothing is what it seems. It's Detective Jerry Black's (Jack Nicholson) last day on the job before his long-awaited retirement.  After little girl is mutilated and murdered, Jerry doesn't think that the suspect they've arrested is the right man, because he has learned that this is the third incident involving girls with the exact same description.  After pledging to the mother that he will find the killer, Jerry retires.  Hey buys an old gas station in the mountains near the crime scenes in order to search for a tall man who drives a black station wagon, gives toy porcupines as gifts, and calls himself "the wizard".  Like the film, the score takes us to a dark and strange world.

Composers Hans Zimmer and Klaus Badelt score the film differently than the usual Media Ventures approach.  It isn't a score that is particularly memorable like other scores such as The Peacemaker, The Rock, or (more notably) Gladiator.  The music doesn't exactly make an entertaining listen like the scores previously mentioned, but it does work perfectly in the film - which is where it matters the most.

The music is very ambient, and filled with the plenty of synths.  Acoustic guitars with piano create unique colors and textures.  The main theme from The Pledge is presented in the opening track and is the most thematic material on the disc.  High stings accompanied with a female vocalist are the theme's highlights.  It is heard on a few other tracks but the music really just serves as the pulse of the movie.  It is stoic, and always there.

If a pulse pounding, synth slamming Media Ventures-esque action score is the type of music you're expecting, don't buy this disc.  As I said before, it works great in the film but the music isn't for everybody; especially if you're looking for another Gladiator.