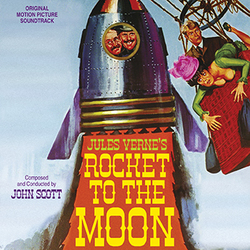 Jules Verne's Rocket to the Moon

By the time of Rocket to the Moon, the word-of-mouth on John Scott's film scoring abilities was spreading, and director Don Sharp hired him to do the score – that began a fruitful director/composer relationship that continued for several years. For Rocket to the Moon, Scott came up with a tuneful, eclectic, and wonderful score – the main theme is so infectiously melodic that it's hard to get it out of your head once you've heard it.

Rocket to the Moon was released on LP in the UK – this is its CD debut. John Scott's music has delighted and touched audiences all over the world, and it's enlivened and enhanced a whole slew of movies. No matter what the genre, his scores are filled with wonderful themes, running the gamut from drama to comedy to romance, to adventure, thrills, and suspense, or whatever else the films might have called for.