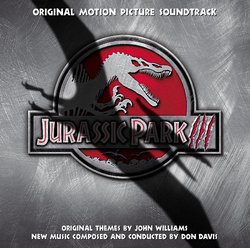 When Steven Spielberg announced he was going to pass on directing Jurassic Park III, it really came as no surprise - he wanted to move on and pursue other projects.  In his stead, director Joe Johnston (Jumanji, The Rocketeer) took the helm.  On the music end, John Williams (who had done the previous two scores) was going to be too busy with A.I.: Artificial Intelligence to write the score, so he picked The Matrix composer Don Davis.  The film follows the return of everyone's cynical paleontologist Alan Grant (Sam Neill) as he is hired by a husband and wife (William H. Macy and Téa Leoni) to "return" to Isla Sorna (a.k.a. "Site B") to rescue their son, Eric (Trevor Morgan).  (Once there, Grant of course points out that he's never been to Isla Sorna - he was at Isla Nublar.)  With a bunch of witty references to the two previous films, and a new dinosaur that's bigger and badder than the T-Rex, Jurassic Park III delivers plenty of action and thrills, while falling just a little short on exposition and emotion.  That unevenness is quite prevalent in the frenetic energy-laden score that Davis provides.

The album starts out with the dark and ominous "Isla Sorna Sailing Situation".  It's a rather inconceivable situation that allows Eric to end up stranded on the island.  Williams's Jurassic Park themes are excerpted throughout, which is what you need for a Jurassic Park movie.  "The Dinosaur Flyby" uses a rendition of the main theme that is a dead-on reconstruction of Williams's version, except it's been slightly modified to fit the cuts in the picture.  The inevitable sense of familiarity in hearing these themes intermingled with Davis's score allows us to accept Davis's musical style as befitting a Jurassic Park film.

But Davis doesn't just rehash Williams's themes.  He also comes up with plenty of his own new thematic material, with a primary new theme representing the estranged family and their ultimate reunion.  By taking the language that Williams created for the first two films and deconstructing it, Davis has written a score that meshes in quite well to the world of Jurassic Park without feeling tacked on or forced.  There are plenty of orchestration techniques that shout out as "Williams" techniques.  Davis has truly done his homework.

Much of the music on the album is full-bore action.  The orchestra is really put through their paces, and the unrelenting energy can actually start to wear you down after a while.  It's interesting to note that a few of the cues on the album ended up not being used in the final film.  "Clash of Extinction", a raucous action cue underscoring the battle between the T-Rex and the Spinosaurus, is completely absent from the film.  The middle part of "Bone Man Ben", during which a frantic call to civilization is interrupted by the Spinosaurus, is also missing.  Conversely, there are many cues that are in the final film that don't appear on the album.  Most notably, Davis did a rendition of the tense string-based theme heard in the second half of "Incident At Isla Nublar" (on the original Jurassic Park album) which underscored a tense Velociraptor chase in the forest.  Also much of the emotional and calm underscore in the film didn't make it on the album.  But there's not that much of it anyways, since the film has been tightened up significantly by the sheer lack of any true emotional exposition.  "Billy Oblivion", however, shows up in the film in its entirety (from what I could tell) and it's a delightful action cue that not only refers to various thematic elements from Jurassic Park, but also a little bit of the "Visitor in San Diego" cue from The Lost World.

"The Hat Returns / End Credits" is a nice wrap-up of the main Williams themes, with the integration of Davis's new themes for the end titles scroll.  One item that is a source of much debate is the inclusion of the classic Randy Newman song, "Big Hat, No Cattle".  Well, it's used as source music during a scene early in the film, and if you get the meaning of the song, it's quite a little joke.  After all, the whole film is about people who just rush into things without thinking them through - and with that, the song is deservedly included on the album.  Also included on the disc is a bit of multimedia, for those with computers, where you can read some notes about the film and a short text-based interview with Don Davis, as well as view a trailer for the film and the upcoming computer game.

Don Davis has ultimately delivered.  The score, which works seamlessly and excellently in the film, is a great example of how "adaptive" film scoring should be done.  This is no Ken Thorne Superman II approach to integrating previously written themes; this is the right way to do it.  By understanding the musical language that Williams had set down in the first two films, Davis has done everything correct.  Where the album suffers though, is from the sheer amount of intense music.  That isn't to say the music is bad; it's just that it makes it a little hard to keep listening to over and over again: this isn't an album to just play because you want to hear it.  Chances are, you'll play the album for particular segments and sections.  But it's those segments and sections, as well as an appreciation for the complexity and intensity of the score, that should convince you to pick this album up.