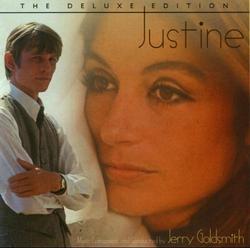 In revisiting Justine we discover a score that is extremely beautiful, exotic and exceptionally flavorful. Goldsmith's mystical melodies were spiced with recorder, auto harp and sitar and he succeeded well in producing an intoxicating work that stands proudly as a highly unique and individual opus among his other truly extraordinary and more famous work of the time.

As was not uncommon at the time, the release of a soundtrack album brought about an entirely new recording of the music. For the new recording, the composer relocated to London and even composed a couple of new pieces which would be exclusive to the album. Other than this, the rethinking of the score for LP presentation consisted largely of resequencing the music and retitling some of the film's cues.

Along with the album recording, this CD presents, for the first time anywhere, the original soundtrack recording from the film. The ultimate and last word on Jerry Goldsmith's Justine is now available as a very special deluxe edition from the Varčse Sarabande CD Club.