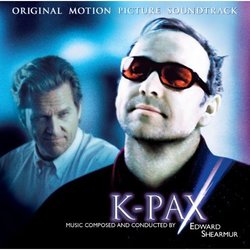 Prot (Kevin Spacey) claims to be an alien from the planet K-PAX.  Dr. Mark Powell (Jeff Bridges) is the head of the Manhattan Psychiatric Institute, and wants to figure out what Prot's story really is.  As the film K-Pax progresses, Powell begins to wonder if Prot isn't indeed telling the truth - a truth that the other inmates seem to accept without a second thought.  The film combines elements of One Flew Over The Cuckoo's Nest with Starman, but never really felt like it added up to much in the end for me.  Spacey's performance was quite good, but I felt that the movie plodded on a bit longer than it needed to.  Helping ease the boredom, however, was Edward Shearmur's sparse contemporary score.

The main theme, played on piano, can be heard in "Grand Central".  The cue takes on a bit of a contemporary beat with the percussion, and a secondary theme with a bit of a groove takes us through the opening credit sequence.  Elements of the two themes are used throughout the score.  The score ranges from upbeat and wondrous, to somber and thoughtful.  "Constellation Lyra", where Prot astounds a bunch of astrophysicists with his technical acuity regarding the location of where he claims K-PAX to be, starts off very cold, with harsh strings reverberating, and building to a restatement of the piano theme.

As Dr. Powell tries to find out more information regarding Prot, and who he really is, he makes a discovery that takes him to "New Mexico".  This lengthy cue introduces a solo voice as Powell learns one possible truth to the identity of Prot.  It's a sad cue, and rather contemplative.  The film's ending is ambiguous, leaving it up to the audience to decide what happened.  I like the music Shearmur wrote for the climax ("July 27th"); it starts off ominous and uncertain, then becomes exciting and inspired, then comes back down to a more plaintive level with another restatement of the main theme.

Shearmur's score to K-PAX is not a groundbreaking score, but it suits the movie just fine.  It lends the right amount of emotion and texture where it's needed, and stands out as a good example of contemporary film music.  Running a little over 43-minutes long, this album isn't really something you necessarily need to rush out and get, but if you enjoy contemporary minimalist film music, then this score will be right up your alley.