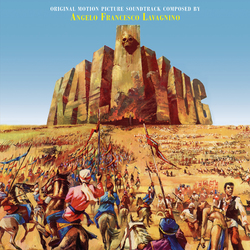 Although it was initially shot as one three-hour epic, the producers finally decided to split it and release it as two different films of 90 minutes each. Set in India during British rule, the films featured vengeful goddesses, murders, exotic dancers, lovers, traitors, battles and great palaces.

The rich, versatile and powerful epic score composed by Angelo Francesco Lavagnino - one of the scores most appreciated by his fans - is a study of the clash between two different musical cultures. Since the conflict arises from British interference in India, the composer divided the score into these two perspectives.

Lavagnino's music for Kali Yug, la dea della vendetta and Il mistero del tempio indiano should be viewed as one continuous piece of scoring. (In fact, both were recorded at the same sessions under the baton of Carlo Savina.) The composer wrote and recorded the music for the two movies just as if he were working on one film. There are, however, some differences to be noted. He composed a bit less music for the sequel since some cues were simply repurposed from the first movie. It should be mentioned that certain cuts of Il mistero del tempio indiano begin with a summary of Kali Yug - this was also tracked with existing cues and the editing was so crude that it is not worth recreating. But the only music repeated on both CDs is the opening credits cue, which is meant to lend a more cohesive structure to the second disc.

Only a 36-minute LP from Kali Yug was released on LP by CAM at the time of the film, and it was reissued on CD by the same company in the early 1990s. Now, all the music recorded for both films is available for the first time. This collection has been entirely produced and supervised by Claudio Fuiano, restored and mastered by Chris Malone from first-generation master tapes. The colourful booklet includes detailed liner notes by Gergely Hubai, discussing the films, the composer and the scores.