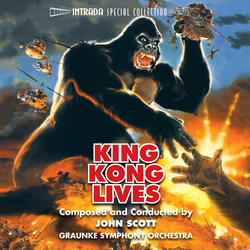 For the sequel to the 1976 remake King Kong, composer John Scott was brought in to give both Kong and his new love musical life, capturing both the romance, the adventure, and the thrills of having two apes in love and on the loose. Contrary to direction film composers get nowadays, Scott was told to provide melody and emotion. Today's film makers run to the hills when they hear those two word associated with music.

At the time of the film's release, Scott had produced a 47-minute MCA LP that captured most of the score, providing the perfect presentation. While no CD was released in the US, a Japanese CD emerged, with some additional gorilla grunts added for good measure. Now Intrada has released the first US release of the score on CD (without the gorilla editorials). One of John Scott's finest hours deservedly brought back into print.