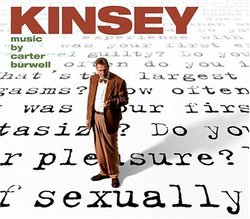 One of the many things that fascinates me about Carter Burwell is the way in which he is able to so easily compose music to compliment a particular time period. If you listen closely, you can hear this deft ability in many of his scores – from Barton Fink to Rob Roy. No matter if it takes place in the past or the future, Burwell has a gift for capturing the appropriate sound for any film's particular time and setting.

Such is the case with Kinsey, the story about a doctor in the late '40s whose studies on sexual behavior in humans caused quite a stir in the scientific community. The 1940s and '50s is a period that Burwell seems to know like the back of his hand as exemplified by his excellent work on such films as The Hudsucker Proxy, The Man Who Wasn't There and Gods and Monsters. The latter film was directed by Bill Condon, who is also the writer/director for Kinsey. Both of them seemed to enjoy a good collaboration on that film, so it makes perfect sense for him and Burwell to once again reunite.

And what a wonderful reunion it is. From the beginning cue to the end, it feels as if you are taken through the dramatic journey with Dr. Alfred Kinsey as he explores a more taboo side of the human condition, does research, slips and falls, then gets back on his feet. Far from triumphant, but not without its happy moments, the film beautifully depicts life in the Midwest in the 1940s without being particularly ornate or even beautiful. Burwell, along with finding the right tone for the time period, has definitely found it for the location of this story as well.

Two cues that perfectly display this are "The Call of the Wild" and "Find a Million." The former is a lengthy introduction to the film's main themes, remaining on a positive yet melancholy note. It's nice to have such a long, slow-paced illustration through music of the barren and flat Midwest while retaining a bit of '40s flair. "Find a Million" is probably my favorite cue on the album, and is one of my favorite pieces of music composed by Burwell. It captures the true essence of resilience, curiosity, and other elements of the human condition. The cue is probably the most fun I've had in quite a while listening to a piece composed by Burwell.

At the risk of sounding like Lemony Snicket, I must warn those who are looking for an upbeat, happy score: "Kinsey" is anything but. This is probably the saddest score that Burwell has ever composed, which is not to say that it is a sad effort by Mr. Burwell. The story of Dr. Kinsey is not a happy one, and the music most appropriately reflects that. The score is brilliant, and will leave Burwell fans clamoring for more. However, for the novice film score listener, the score will suffice in its melancholy tone and atmosphere.

As I have listened to his work over the years, I have come to believe that Carter Burwell is the Max Steiner for our time. Steiner, to me, always delivered a very rich, appropriate, and complimentary score to his films. It was the film that always dictated his approach, which was never overbearing or domineering – qualities that Carter Burwell exemplifies beautifully, here with Kinsey, and in the rest of his work.