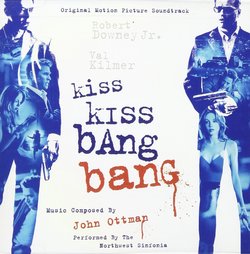 Kiss Kiss Bang Bang is one of the most entertaining films I\'ve seen this year; it is absolutely hilarious while taking itself somewhat seriously and effectively pulling off an engaging murder mystery, all with a classic noir feel. Producer Joel Silver brought recent collaborator John Ottman (Gothika, House of Wax) on board to provide the mysterious and suave score. Despite his work on X2, Fantastic Four, and the upcoming Superman Returns, Ottman should not be thought of as a superhero composer, as one Danny Elfman has. Most of Ottman\'s filmography consists of mysteries and thrillers, such as The Usual Suspects and the self-directed Urban Legends: Final Cut.

The "Main Titles" introduces the mystery theme, which is a fast, repeated motif that passes between the strings and saxophones. The second theme in the score is presented in "Innocent Times" and is Harmony\'s theme, which is a mellower theme on the piano and strings, which is also performed on the sax. The rest of the album showcases the energy Ottman put into the film with the way he weaves the two themes in both dark and playful ways. One of the standout cues is "Harry\'s Rage" which presents the most dramatic version of the mystery theme. Ottman also uses brass occasionally for added color, as in "Saving Perry", which also contains a creative use of the mystery theme in the low strings as a bass line. "That\'s the Story" ends the score with a piano, violin, and horn version of Harmony\'s theme.

Like the film, Ottman\'s score for Kiss Kiss Bang Bang takes repeated listens before it can be fully appreciated. At nearly an hour, the album does seem a little long, especially with the Robert Downey Jr. song at the end, which does not add anything to Ottman\'s music. The score itself, however, while not among Ottman\'s most impressive works, showcases his subtle skill in instrumentation, which here works well in combining all the elements of the darkly humorous film.