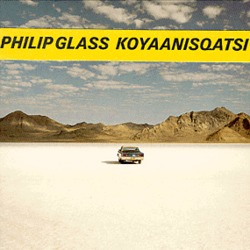 Performed by
The Philip Glass Ensemble

There's little debate about Koyaanisqatsi's importance; it's relevance in the "art film" world. In brief, it was a film with no story, no dialogue, and no narrative structure of any kind. It was meant to be a cautionary tale, a warning against humanity's corruption of the naturally earth. Instead, it found itself a cult following for the sheer beauty of it's rapidly-moving images, and for the intriguing score which accompanied it by "minimalist" composer Philip Glass.

Recently, Glass seems to have been in a re-recording frenzy. Much of his early concert work has been re-released in new and expanded editions by the Nonesuch label—pieces like "Music In Twelve Parts", "Two Pages," the revolutionary opera "Einstein On the Beach", and now "Koyaanisqatsi." For the most part, it's the same performers, though this time out, there is more of the score made available on the disc, and thanks to modern recording technology, crisper sound.

As an owner of the original recording—which clocked in at about 45 minutes, as compared to over 70 on the new disc—I was immediately struck by how much cleaner the new recording sounds. The opening notes in the lowest notes of the organ on the original recording were very up-front, very pronounced. Here, they seem mellow - almost subdued - and this sounds as though it owes more to the new recording technology than any performance aspect. What's more, the whole recording seems like this to me. In fact, if there's one complaint to be had, it is that the recording is too muffled in parts. Granted, in some parts of the score, it seems to work better (the first and final tracks are fine examples of this). I was, though, looking forward to the almost primitive-sounding synth design of "Pruit Igoe" as it was heard in the original, and after much listening, still greatly prefer the original recording of that piece to the newer one.

Any complaints I might have about the "improved" sound design, though, are overshadowed by my happiness with the new material. As the liner notes point out, an integral part of any Philip Glass composition is length, and here the pieces run together as one continuous whole, rather than seeming, as the original recording did, like a series of separate compositions. As an avid Glass fan, I was pleased to have over twenty minutes of the famous/infamous "The Grid," as well as some more "Prophecies."

If you enjoyed the film, or the original soundtrack, this is quite a worthy investment. If you are unfamiliar with this score (or Glass in general) it's a good place to start. As Glass' career goes up until this point, this score falls in what is arguably one of the most prolific periods of his career, and there's clearly a reason that it established his place in the pop culture.