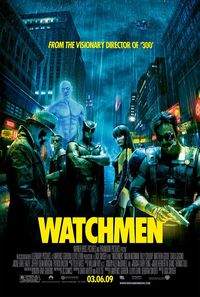 In the interest of full disclosure: I never read Watchmen, the ground-breaking graphic novel from Alan Moore and Dave Gibbons. Released back in 1986, the 12-part series revealed a darker, grittier alternate universe, in which superheroes existed, and helped us win the Vietnam War, but now we\'re closer to nuclear war with the Soviet Union. Five-term president Richard Nixon has outlawed masked vigilantes, and now most of the former "Watchmen" group have retired - but when The Comedian (a former team member) is murdered, a larger conspiracy appears to be unfolding.

Much of Watchmen focuses on the characters, with the plot almost secondary until the final act. Narrated (at times) through Rorschach (Jackey Earl Haley), the film taken on a noir-ish murder mystery tone, with Rorschach\'s general disgust with society permeating much of the narrative. We learn all about Night Owl II (Patrick Wilson), who has been struggling with fitting into society post-superhero status, and Silk Spectre II (Malin Akerman) and her complex relationship with the emotionally detached Dr. Manhattan (Billy Crudup), a scientist who became a true superhero after an experiment went awry. We learn about the Comedian (Jeffrey Dean Morgan) and his work with the US government and unorthodox relationship with Silk Spectre (Carla Gugino). And finally, we learn about Ozymandias (Matthew Goode), one of the few superheroes who revealed his true identity and is now a rather successful businessman.

There\'s a lot of depth and complexity to these characters and their backstories, and it takes a bit of time and involvement to let their tales and interactions play out. I don\'t want to go into the plot details, since it\'s not fair to "give it away", but with it slowly unfolding over the first two hours, Watchmen might seem a little heavy handed and self-important, but it all has a purpose. Director Zack Snyder handles much of the visual aspects deftly, with creative camera angles and variable film speeds to recreate the feeling of a comic book, without the cheesiness. There are a few fight scenes that are stylistic, and a few moments of graphic gooey violence, and while that might turn some people off from the film, keep in mind that it IS an R-rated feature.

The visual effects are handled well, with Dr. Manhattan being the most impressive, especially the close-ups on his face where you can see every pore. (The character is completely digital.) Music by Tyler Bates is effective, big, and moody at times, but overshadowed by a ton of "needle-dropped" songs, including some Philip Glass in a rather pivotal sequence.

There are a few allegorical aspects to Watchmen as well; written at the height of the Cold War, the graphic novel probably meant more in the context of the times. Today, however, in a post-Cold War and post-9/11 world, it takes on an almost unintentional mockery of foreign relations, especially with the whole idea revealed at the end (which, of course, I won\'t spoil for you here).

A visual treat, Watchmen is best seen on the big screen. It\'s a long fim - running just under 3 hours long - but I found it interesting, enjoyable, and overall a well crafted piece of cinema. I don\'t think it\'s something to run out and see again after you first see it, but it\'s probably worth a second look after I read the graphic novel.