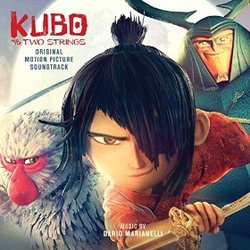 Kubo and the Two Strings

Review: Kubo and the Two Strings

Kubo and the Two Strings dazzled audiences with some of the most beautiful animation and heartfelt storytelling seen in 2016. Directed by Travis Knight, the story of Kubo and The Two Strings journeys through adventurous, beautifully lush, and cleverly animated sets. The movie features Kubo (Art Parkinson) and his friends, Monkey (Charlize Theron) and Beatle (Matthew McConaughey), as they search for a magical suit of armor. The characters discover a mysterious past and form connections which reveal long lost memories.

The atmosphere constructed by the film's storyline and animation provide Dario Marianelli with everything he needs to create an outstanding score. The musical elements immediately take hold of the audience and one becomes captivated in the cohesive experience.

From the first notes of the opening cue, Marianelli enfolds the listener with mammoth sized chords. These chords set a fundamental sound which the entire score resonates from. In combination with the powerful chords, Marianelli wonderfully orchestrates the cue highlighting it with choir and massive swells of brass crescendos and decrescendos. The opening track "The Impossible Waves" also introduces the important guitar/shamisen chord/attack. This color is used only a few times in the film but it plays a large role in characterizing the magic Kubo's mother has. By using both instruments, Marianelli creates a culturally diverse impact, providing the power of an electric rock guitar and the timbre of an Asian shamisen. The cue ends delicately as the alluring "Love Theme" plays through an ethnic flute (most likely a Shakuhachi) in duet with piano and strings, revealing Kubo and his missing eye for the first time. The sharp craftsmanship of the opening cue is exhibited through its precise hit points, lush orchestration while being contained in a simple and attractive form which matches the story sublimely.

There are two themes which play off of each other and sound very similar. The "Ancestor Theme" and the Dark Past Theme have very similar forms, length, and musical gestures. The most common element between them is a suspension which is heard at the end of each of the themes. These themes work well together insofar as they both have to deal with past memories and events which are told throughout the film. In the track "The Impossible Waves", the Dark Past Theme can be heard very clearly, along with at the end of "Monkey's Story" and "Above and Below". The Ancestor Theme is most clearly heard in "Ancestors" or "Rebirth". Both melodies contain complex chords and create the sense of time. In the track "Showdown with Grandfather" these two themes combat each other in the final battle of the film. When Kubo figures out how to defeat Grandfather, the immediate contrast allows the Ancestor Theme to gloriously soar.

The main melody (first heard in "The Impossible Waves") is based on a simple repetitive motive which uses a 1+2+3 pattern (often described by Bernstein). The melody is more than just a love theme, the way it ebbs back and forth creates a feeling of boundless love and memories. For an animated children's movie, the Love Theme does an excellent job in providing the emotional connection Kubo has with Hanzo and his Mother. The emotional rise and fall of the Love Theme pours out every time there is an intimate moment between the characters. The theme is used a generous amount but never overbearingly. The regular play of this theme allows the listener to grasp it very well, leaving the most substantial and well-crafted theme stuck in their head.

In tracks like "The Giant Skeleton" and "The Leafy Galleon", the theme is cleverly augmented into styles which convey comical gestures during the battle with the skeleton while matching the goofy personality of Beatle. The Love Theme is most clearly played in the final cue of the film "Rebirth".

Both the Love Theme and the Ancestor Theme are combined to create a stunning cue, which is one of the most beautiful in all of modern animation film. At the start of the track, the piano seamlessly transitions from harp, to strings, to full orchestra. This profound musical moment gradually rises as the French horns take over, exuding the most powerful and warm variation on the love melody in the entire film.

Overall, Marianelli provided this film with an absolutely outstanding score. The creative musical elements, ethnic fusion, and melodic ingenuity all come together to formulate a masterful soundtrack. With his work on The Boxtrolls and now Kubo and the Two Strings, there is much to look forward to with Marianelli's work in collaboration with animation films.