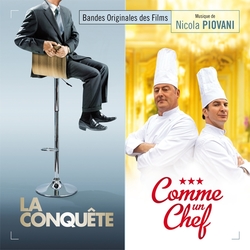 Born in Rome in 1946, Nicola Piovani is one of the stars of Italian film music. But he also has a special relationship with France. He gave an Italian touch to these two apparently "purely French" projects: on the one hand, a satire of French domestic policy (La Conquęte, directed by Xavier Durringer); on the other hand, a film about French cuisine (Comme un chef, directed by Daniel Cohen).

In Durringer's film, Piovani's music is used above all to highlight the comedic aspect of the French political world. Piovani composed a baroque counterpoint, close to the twisted circus music (reminiscent of the work of Nino Rota), which would evoke the theatrical quality of politics and give it a quasi-burlesque dimension. In Cohen's film, Nicola Piovani's music reflects the director's humane point of view in this playful and innocent melody where a honky-tonk piano seems to be conversing with a cheerful trombone.

For these two soundtracks, Nicola Piovani reaches his target again, showing at once all his humour, his talent for creating melodies and orchestrations, and his emotional impact based on simple yet powerful effects. This remastered edition features the same content as the digital releases. The CD comes with an 8-page booklet with liner notes by Nicolas Magenham, discussing the films and the scores.