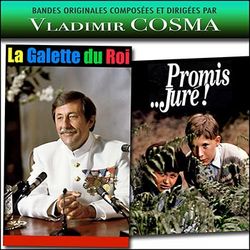 Vladimir Cosma is known primarily as the grand master of comedic film music and it's in this capacity that we present these two original soundtracks which have never before appeared on CD. Jean-Michel Ribes' La galette du roi (The King's Cake), released in 1986, revolves around the maneuvers of the penniless king of a paradisiacal island, who is eager to marry his daughter to the son of a wealthy industrialist.

Vladimir Cosma's large orchestral score is appealing right from the first track, which states the main theme. While the compositions remain simple, usually built on the alternation of chorus and verse, as songs without words, their melodic line and the quality and variety of their arrangements bear the stamp of an outstanding creator. Many tracks display great panache and elegance despite the wacky nature of the plot. In a few others, the listener can feel only a hint of the tongue-in-cheek intention, while some source music reflect celebration and dance. The mambo, performed by a jazzy big band, gets the lion's share in La galette du roi.