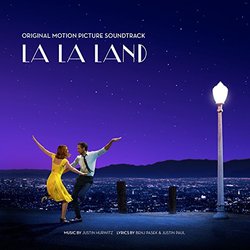 In a film unlike any other, director Damien Chazelle takes the audience on a journey through the exciting world of La La Land. Starring Ryan Gosling and Emma Stone, La La Land follows the story of two hopeless romantics as they search to find themselves and one another. The picture, set in present day Hollywood, shines a new light on the "musical movie" style and form, serving as a drama and musical concurrently.

With music composed by Justin Hurwitz and lyrics by Benj Pasek and Justin Noble Paul, the soundtrack to La La Land offers a wide variety of musical genre. This soundtrack will particularly appeal to those who enjoy the classic "film score sound" and the music from The Golden Age of Hollywood.

Highlight Tracks:
1. Audition (The Fools Who Dream)
2. Planetarium
3. City of Stars
4. Epilogue
5. Someone In The Crowd

The opening number, "Another Day Of Sun," takes an immediate dive into a feel-good, Broadway style production. This abrupt start to the film hooks the audience, clearly letting them know that this is a musical (something the director intended). Unlike the other songs, the beginning of the film is accompanied with a large dance number introducing the "retro" aesthetic of the music and production. Sadly, the vocals to "Another Day Of Sun" were mixed very poorly. On top of that, many of the vocal soloists seemed to be whispering and the orchestra ended up overpowering them. This oversight caused the song to suffer in terms of importance and clarity in relation to the other songs on the album.

Although "Another Day Of Sun" and "Someone In The Crowd" are different tracks prior to the meeting of Mia and Sebastian, the tracks present a particular problem. One of the largest concerns about this soundtrack draws from its cohesiveness. Unlike many "okay" soundtracks, "great" film scores are rooted in their ability to create and develop a sonic world and atmosphere in which the film can present itself. This soundtrack is without a doubt "great," but its cohesive elements make each cue and song difficult to distinguish. There is not just one reason for this problem, it could be due to the always present jazz style, transparent orchestration, similar musical contour, or even the related tonalities and ranges of each song. For example, the riff (the repeating motor which takes place under the lyrics or after the chorus has played) of "Another Day Of Sun" and "Someone In The Crowd" are decidedly similar. This causes the greatest problem during the epilogue in which the cue cuts a medley of each song played throughout the film. The listener is left confused, subtracting importance from those themes due to the uniformity of the songs.

Unlike many of the film scores nominated in the award shows for 2016 films, the soundtrack to La La Land has great melodies! The melodies which stand out most throughout the film and received the most recognition in the film are "Mia and Sebastian's Theme," "City of Stars," and "The Fools Who Dream." Hands down, these themes bestowed magic upon the film. Each theme is well crafted and follows certain guidelines found in great film melodies of the past.

"Mia and Sebastian's Theme" and "City of Stars" demonstrate a special relationship because they describe Mia and Sebastian's relationship through its ups and downs. One being completely reminiscent of an old Hollywood waltz, invoking playful thoughts, while the other distills the hopes and dreams they are wishing to pursue with each other. Musically speaking, they are also related by their melodic shaping.

"The Fools Who Dream" is a piece one does not normally experience in a film. The beautifully crafted song creates an atmosphere which bottles up the entire film's emotion in one moment. The tender story relayed in the song portrays dreams in their rawest form and compares Mia and Sebastian's desires to leaping in the Seine. From the simplicity of the scene to the craftsmanship of the song, "The Fools Who Dream" pulls the listener closer to true human emotion than other films would dare to do, let alone through song.

The finale of the film takes the viewer for a tear jerking experience as the soundtrack samples all of the tracks presented previously. This holistic presentation is not only satisfying and delightful, but it also ties together the adventure that the film and music has taken the listener through. The pretty orchestration and use of classic Hollywood scoring techniques (such as the choir) in "Epilogue" and "The End" is what makes this conclusion so bitter sweet.

In the end, this soundtrack radiates with life, leaving memorable melodies and honest emotions within the listener. Excitement and passion drive this film. The score demonstrates its virtue through various theater style songs, dynamic jazz tunes, and beautiful themes which heighten the film to a new level. La La Land is an absolutely brilliant picture. The film and soundtrack are destined to stand the test of time, reminiscent of the Golden Age of Hollywood.