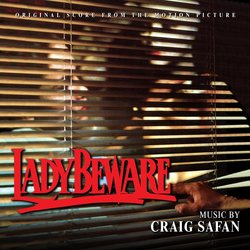 The 1980s were a busy period for Safan. He scored more than three dozen projects during the decade, ranging from feature films, television series, and made-for-TV movies. During the middle of this period, Safan began exploring scoring movies by combining orchestras with electronics. Safan's score for Lady Beware, combines synthesizers and sampled sounds mixed with a large string section to generate a compelling and cohesive score, which builds a good deal of suspense for Katya's predicament, and then, after a turning point in the story, attends the retaliation she determinedly sets upon Jack. Safan was able to pull together a sizeable string orchestra of about 25 musicians, which equated to a dozen violins, four violas, four cellos, and two basses. Uncredited in the film, veteran scoring mixer Dan Wallin imbued Safan's musical ensemble with its rich, sonic seasoning. Safan's music does its job to elevate the tension of the story, enhance the sensitivity of the main character and evoke the inherent danger and apprehension.

An early compact disc release for Lady Beware, appeared in 1987, coinciding with the film's release, including songs from the film and a small selection of score tracks, Dragon's Domain Records now presents the world premiere soundtrack release of Lady Beware, featuring the complete score composed by Craig Safan, and mastered by James Nelson of Digital Outland. The booklet contains liner notes written by noted author Randall D. Larson and includes comments from the composer.