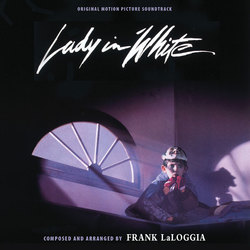 Frank LaLoggia's Lady in White transcended its modest budget with an impressive cast and startling visual beauty, combined with the heartfelt nostalgia of a memoir. LaLoggia's film has gained an increasingly devoted cult following in the three decades since its original release, with the filmmaker's own unusually lush and melodic orchestral score a key component in its popularity.

The ambitiously melodic score pays homage to the composers who had filled LaLoggia's soundtrack collection as a teenager. The greatest influence can be heard in the music of Elmer Bernstein, as Lady's themes and orchestrations have the distinctive warmth of a classic Bernstein score, and yet he evokes the master so clearly without ever copying from Bernstein's own masterpiece of childhood wonder and terror, To Kill a Mockingbird, a film clearly echoed in Lady's subplot of racial injustice. The score is dominated by bright and playful themes that reinforce the lighthearted mood of the early sequences and make the film's surprisingly dark turns even more effective. The later parts of the score are dominated by a simple, literally "haunting" choral theme for the murdered girl, whose heart-breaking innocence serves almost as a siren song as young Frankie pursues the mystery; for the finale, LaLoggia provides a waltz as the ghostly girl and her grief-stricken mother are reunited in the heavens.

As an added bonus, a second disc featuring LaLoggia's concept album, Frankie Goes to Tuscany, adds a spirited and entirely different musical experience from the ghost story on the first disc. LaLoggia created, almost entirely, the recording with digitally sampled instruments via computer, and while this is in sharp contrast to the 70-piece orchestra that recorded Lady in White, it clearly boasts LaLoggia's melody-driven, film-score inspired ideas. As LaLoggia comments in the notes, "Frankie Goes to Tuscany is a film score in search of a movie. In fact, I'd say that just about every track has a movie idea behind it in varied stages of development."