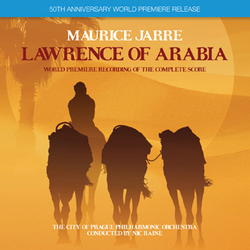 A Special 50th Anniversary Release of the complete newly-recorded Oscar-winning score from the David Lean classic with music by Maurice Jarre.

Widely considered one of the most influential films in film history this album features, for the first time, the complete 77-Minute score performed by the acclaimed and award-winning City of Prague Philharmonic Orchestra, conducted by Nic Raine. The album was recorded from the original 1962 orchestrations by Gerard Schurmann.

Though a virtual unknown in Hollywood at the time, Maurice Jarre would soon earn the first of his 3 Oscars for his majestic and ground-breaking score for Lawrence of Arabia. As described by film historian and author Frank K. DeWald in the booklet of the recording:

"His [Jarre's] rich thematic material for Lawrence [of Arabia] included both "Western" and "Eastern" melodic ideas, and his sweeping theme for the desert proved highly memorable (exceeded only by "Lara's Theme" from Doctor Zhivago a few years later). His handling of those ideas was dramatically apt, and he proved fully up to the challenge of the many moments in the film when music alone (or, rather, music in partnership with the breathtaking cinematography) needed to carry the full emotional weight of a scene."