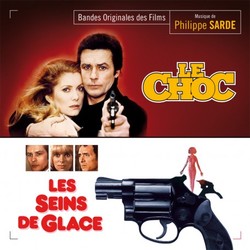 Le Choc, adapted from a novel by Jean-Patrick Manchette and directed by Robin Davis tells the story of Martin, a hitman (Alain Delon) who decides to retire after a last mission but his former employers send killers to track him down. In his flight, he falls in love with Claire (Catherine Deneuve). The score plays the card of the rough and harsh film noir atmosphere, with a contrast created by the love story between the two main characters. Recorded at Abbey Road Studios, the score beautifully mixes a jazz-rock rhythm section, the legendary soprano saxophone of Wayne Shorter and the London Symphony Orchestra.

Les Seins de glace, adapted from a novel by Richard Matheson and directed by Georges Lautner, is a thriller in which mystery and seduction reign supreme, revolving around the mysterious Peggy Lister (Mireille Darc), a young woman torn between François (Claude Brasseur) and Marc (Alain Delon). Philippe Sarde wrote dodecaphonic music to underline the thriller atmosphere of the film. The score is also based on a nostalgic theme, full of mystery, for which he used an electrical violin and an electrical cello to make the music sound chilling instead of romantic.

The program has been assembled, produced and supervised by Philippe Sarde and Édouard Dubois. This present edition has been fully remastered from complete scoring session elements and features previously unreleased tracks for both scores. The package includes a 12-page booklet featuring exclusive liner notes by writer Gérard Dastugue and new comments by Philippe Sarde on his collaboration with Alain Delon and the two directors.