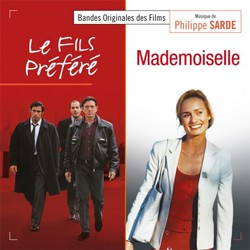 In collaboration with BMG and Pathé Films, Music Box Records continues their collaboration with Philippe Sarde and proudly presents here two previously unreleased scores written a few years apart for two films that achieved public success at the time they came out.

Le Fils préféré (The Favourite Son) (1994) is Nicole Garcia's second film as a director, four years after her first feature film Un week-end sur deux. The film tells the story of Jean-Paul Mantegna (Gérard Lanvin) who, facing great financial difficulties, asks his father Raphaël (Roberto Herlitzka) for money, as well as his two brothers (Bernard Giraudeau and Jean-Marc Barr), but none of them can help him. The family is torn by disputes and tragic events until Jean-Paul discovers the secret of his own destiny. Recorded at Abbey Road studios, the score is written for violas, cellos and double basses. Philippe Sarde collaborated here with the legendary Lee Konitz, a saxophonist whose fluid, almost sensual sound developed along with the 'cool jazz' trend.

With Mademoiselle (2001), Philippe Lioret, a former sound engineer for cinema directed his third feature film, written and shot for Sandrine Bonnaire. She plays Claire, a married woman with two children, who meets Pierre (Jacques Gamblin), a comedian and improviser who gets her to play his game. The score was recorded with the London Symphony Orchestra at the Abbey Road studios and at the Guillaume Tell studios for a special jazz session with an incredible trio led by Maurice Vander at the piano.

This album presents an intimate and sensitive aspect of Philippe Sarde's music between film noir gloominess and romantic glow and will no doubt fall under the spell of this elegant Ravel-style simplicity.

Remastered from the original recording sessions, the program has been assembled, produced and supervised by Philippe Sarde and Dominique Spagnolo. The CD comes with a 12-page booklet with liner notes by Gérard Dastugue, discussing the films and the scores including new comments by Philippe Sarde on his collaboration with the two directors