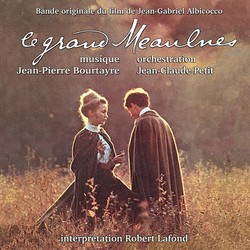 Disques Cinémusique is pleased to present a new recording of the soundtrack to Jean-Gabriel Albicocco's Le Grand Meaulnes (The Wanderer) (1967), considered to be the most successful film adaptation of Alain-Fournier's famous novel. The film's composer, Jean-Pierre Bourtayre, is best known as the author of many successful French songs. He benefited here from the collaboration of the outstanding orchestrator Jean-Claude Petit, who would later assert himself as a film composer in his own right.

It was the perfect team for delivering memorable romantic themes, presented in a series of carefully nuanced variations, which constitute the core of the soundtrack to Le grand Meaulnes. Original creations, certainly, perfectly adapted to the images and the complexity of the characters, but which seems to be music of the ages past. They sound right and classic from the start.

The strings, woodwind, harp and piano of the standard chamber orchestra are joined by several instruments that give the score a special color, both ancient and timeless: spinet, harpsichord, cimbalom, box music, glockenspiel, guitar, bells, and musette. Not to forget a brass section for some source music.

One man orchestra par excellence, Robert Lafond recreated in great detail and with unsurpassed sound quality the magnificent score to Le Grand Meaulnes. We conclude the program with two Arias for choir and orchestra which offer a vocalized version of the major themes. This limited edition of 500 copies comes with a lavish 20-page color booklet. The liner notes, in French and English, by producer Clément Fontaine feature a summary of Le Grand Meaulnes' intricate and fascinating plot.