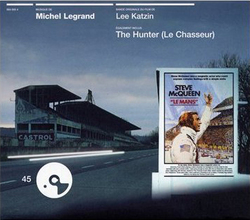 A neat paring this, two scores by Michel Legrand to two movies starring Steve McQueen. Le Mans (1970), McQueen\'s love letter to motor racing was a long cherished project. By the time he got it off the ground, his vision for the film was so firmly in place that the original director, John Sturges, walked out as there was no room for his own creative vision. In walked Lee Katzin, a TV director with only two minor features to his credit, to direct a huge Steve McQueen race car movie. This suited McQueen perfectly, as he didn\'t actually want the headache of directing himself, but nevertheless wanted total artistic control of his pet project. The resulting film is less than satisfying, being more or less porn for petrolheads, and alienating all but the most die hard McQueen fans.

Bringing Michel Legrand aboard was more or less a sensible idea. In 1968, he had scored Norman Jewison\'s The Thomas Crown Affair to great critical and commercial success. Indeed, in conversation with Jewison he told me that he believes this is the most accomplished of all the scores written for him. This is possibly true, as Legrand leant the film a hip veneer of class, and he effortlessly got under the skin of the characters and brought out the layers of sophistication and sexual chemistry between McQueen and Dunaway. And whatever you may think of \"The Windmills of Your Mind\", it suited the films complete remit – an exercise in style over content, and let\'s face it, the content aint bad.

Legrand\'s score for Le Mans is an extremely pleasing entry into his overall canon of work. A jazz score in every definition, he uses an impressionistic approach to convey the notion of speed. There is a theme – \"A Face in the Crowd\" – that weaves throughout the score, lending a degree of cohesion to what could have been seen as simply a jazz album. Rather than \"Mickey Mousing\" the action sequences, he mobilises a terrific jazz ensemble including Jean Luc-Ponty, Shelley Manne and Pete Candoli, augmented by a typically carefree string and brass orchestra to create a feeling of untroubled souls whose raison d\'ętre is \"the race\". This goes somewhat against the evidence we have, as all the racers, McQueen included, go through the film with faces like stone. In fact he creates a vibe that the film is incapable of doing on its own, and it\'s to his credit that he brings so much lightness to what is in truth a rather leaden affair.

In the final analysis the score comes over more of a jazz album than a film soundtrack, a little like \"Michel Legrand – Images of Le Mans\", but that\'s no bad thing. This is Legrand scoring through the action rather than to it. Its an approach that seems to work well for him, and the impressionistic style also works in his, and the films favour.

As a stand alone listen, it\'s highly engaging, never bores, and demonstrates a composer at the top of his jazz game.

The Hunter was sadly to be Steve McQueen\'s last picture. Whether he knew it at the time we\'ll never know. He was becoming ill during the shoot. The long chase sequence in Chicago took many days to film as McQueen could only run a short distance before becoming totally out of breath.

For a thriller about a bounty hunter going about his business, the film has a remarkably warm, even tender centre. The interplay between Steve McQueen\'s Ralph \"Papa\" Thorson and his wife Dotty played by the luminously beautiful Kathryn Harrold, have a gentle sweetness, and an unforced romanticism to them, and are the core of the film. The film has plenty of action sequences, but they are mostly light hearted. The film only truly turns dark concerning one of the many subplots. Thorson\'s wife is stalked by a complete lunatic, and some of the scenes, especially those involving him stalking her at the school where she teaches, are genuinely unnerving. But for the most part the films plays out with a warm, valedictory glow, with McQueen playing his age, most definitely not playing cool, but managing to be effortlessly so despite himself. The ending of the film, at a hospital where Dotty gives birth, is one of the most genuinely touching moments in McQueen\'s career, and it\'s nice to see him bow out on such a warm note.

Legrand\'s score for The Hunter reflects that warmth with a highly romantic theme for Thorson and Dotty. Indeed, the well fleshed out character McQueen plays gives Legrand plenty of material to augment this underrated film. Thorson is man who\'s job is incidental to the what really matters to him – his family, his friends, his classical music collection, his classic car (which, ironically for a McQueen film, he is barely capable of driving), and his classic toy collection. That such a man (and bear in mind this is a true story) is also able to bring to book some of the biggest, baddest and out of control hombres loose in the Midwest, gives plenty of opportunity for Legrand to weave these contradictions into a score which mixes wistfulness, thundering action, nostalgia, and romance into a cohesive whole.

An interesting footnote. The producers found Legrand\'s action cues somewhat lacking, and, with shades of Jerry Fielding and The Getaway, brought in a \"hip\" score composed by Charles Bernstein, and this played in the US territories. Here in Europe we got Legrand\'s score. But when I caught up with his film on video in the early eighties, it contained Legrand\'s score, apart from the extended Chicago chase sequence, which contained Bernstein\'s music. Even then, the vastly different musical styles struck me as rather jarring. Legrand\'s cue for the chase is obviously much more in keeping with the rest of the scores action cues, containing a mixture of freewheeling jazz-rock, and quasi-Vivaldil riffs to reflect the different facets of the scene and the character of Thorson.

The music as presented on this CD, expands upon the music contained in the film, adding more dimension to what is a highly unusual thriller score for its time. Some cues, such as \"Looking for Tommy Price\", are completely new to me, but add to the cohesion of the score.

Contextually, these two scores sit well with Legrand\'s other film work of the period , being much more satisfying a listen than, say Ice Station Zebra or Never Say Never Again, though not quite hitting the heights of The Thomas Crown Affair or The Picasso Summer.

Overall, the sound quality is excellent, and the liner notes, containing an interview with Legrand concerning the two films, hugely enlightening.