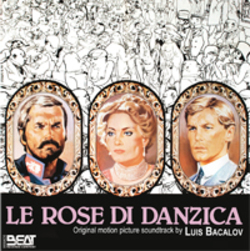 An unreleased title by beloved composer Luis Bacalov, finally released on CD! Le rose di Danzica was written and directed by Alberto Bevilacqua and broadcasted in three episodes by RAI in 1981, preceded by a theatrical version in 1979. Bacalov composed a symphonic score of moving tones, a nod to the classical music of the nineteenth and twentieth century. This CD was assembled using the stereo master tapes of the original recording session.

Mastering by Claudio Fuiano, graphic layout by Alessio Iannuzzi and liner notes (in Italian and English) by Roberto Pugliese.