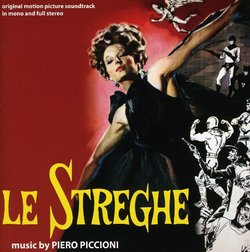 Digitmovies is proud to present for the very first time on CD the complete OST in mono and in full stereo by Piero Piccioni for the episodes La strega bruciata viva (The Witch Scorched Alive) by Luchino Visconti and "Una sera come le altre" ("A Night Like Any Other") by Vittorio De Sica for the 1967 movie Le streghe. The film, which was released on 22 February 1967, is divided into five episodes,

This CD (with a total duration close to 63 minutes) focuses only on the music of Piero Piccioni for this film. The tapes were kept in the private archives of Piccioni and they have been found with the big help of Jason Piccioni, the son of the composer. Two 1/4 reel tapes, one in stereo and one in mono, which have been preserved until today in very good conditions, have really given us the chance to realize this—until today impossible—record dream.

For "The Witch Scorched Alive" Piero Piccioni has written a refined dance floor theme, a shake for piano, organ, drums, guitars and brass, which we might call "The witches shake", reprised with different instrumentations (Tr.1,Tr.3,Tr.5,Tr.Tr.9, Tr.11, Tr.13, Tr.16), and which is the background dance of Gloria in the hotel lounge room, admired by her envious friends who surround her. This dance floor music (much searched and loved by Film Music fans around the world) is alternated with a romantic, rarefied and haunting love theme that, without doubt, is one of the most beautiful love themes of the whole career of Piero Piccioni: a jazzy, slow, suspended, almost sacred theme for harp, vibraphone, guitar, celesta, flute and bass (Tr.4, Tr.6, Tr.8, Tr.10, Tr.12, Tr.14, Tr.15). As bonus tracks at the end of this CD we include, for historical and artistic purposes, the very rare mono version of the shake theme as featured in the opening titles (tr.31)—with some sound effect found in the mono master tape of the final film music/effects mix (sadly a mix without effects did not survive at all)—and a long stereo suite (tr.32) re-recorded by M ° Piccioni which is based on the shake theme and variations of the magical love theme.

The CD does also contain source music tracks like lounge music for piano solo (Tr.2), a piano solo reprise (Tr.7) of the famous Italian hit "Il mondo" by Jimmy Fontana and Gianni Meccia, "Chariot", a big hit of Petula Clark (written by Frank Pourcel and Paul Mauriat) aka "I Will Follow Him" in the stereo mix version with choir and orchestra (Tr.22) and its instrumental version in mono (Tr.27), both of which arranged by Piccioni himself. The score is brilliantly conducted by Bruno Nicolai and Piero Piccioni himself. Please note also that in this OST and almost in all his soundtracks, Piccioni performs solo piano and organ. We devote this CD, which is enriched with many rare archive colour stills, to the great Piero Piccioni and his immortal Film Music Art: an Italian Silver Age OST that fully deserved it to be rescued and preserved.