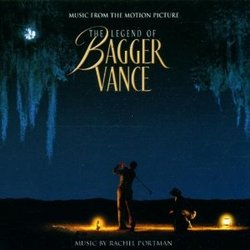 The Legend Of Bagger Vance

Review: Legend of Bagger Vance, The

Now, I'd have to admit I'm not a golf fan. Nor am I a big fan of the actors in this film, but the bringing together of Robert Redford and composer Rachel Portman had me intrigued as to what the eventual musical output would be. I've always enjoyed the musical talent Mr. Redford has culled together on his past films, including Thomas Newman (who replaced John Barry) and two films with Mark Isham, one of which, A River Runs Through It, occurs roughly around the same time this film does. The Legend of Bagger Vance, of which this film is so cryptically titled, is about the trials and tribulations of a young golfer who is miraculously helped by an angelic caddie named, most appropriately, Bagger Vance. Not having seen the film due to its lack of "draw" for me doesn't keep me from enjoying Portman's musical "sequel" to The Cider House Rules.

The music for this film is a mix of the fore mentioned score as well as some nods to her work for the oddball film, The Road To Wellville. It's a beautifully lyrical and poignant score, but unfortunately, nothing extraordinary about it. It's uplifting where necessary, obviously sentimental in the same way Jerry Goldsmith used his melodies in Rudy, but this time applied to a more pastoral pursuit such as golf. A summation of the score as presented here is as good background music to play with emotions, but not defining any specific action, character, or event. The CD is book ended with three jazz pieces, the first by the legendary Fats Waller and the latter by Muggsy Spanner and the timeless Duke Ellington. They try to set this in the early days of jazz, but unfortunately end up as footnotes rather than helping add to the score, almost in counterpoint.

The CD is a pleasant listen, and for Portman, a rather unimpressive follow-up to her Cider House score. I only hoped that this film, had a stronger story and presentation been available, could have helped Rachel Portman write a more inspired and fulfilling score. Unfortunately, when you make a film about something that I'd barely call a sport, it's hard to bridge the gap between "sports" music and "dramatic" music.