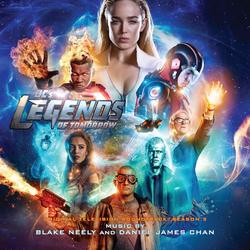 La-La Land Records, DC, Warner Bros. and WaterTower Music present acclaimed composers Blake Neely's and Daniel James Chan's original score from the third hit season of the beloved television series DC's Legends of Tomorrow, starring Brandon Routh, Franz Drameh and Victor Garber. Composers Neely and Chan expertly craft a complex and exciting musicscape for season 3, weaving all the show's drama, thrills and heart together in equal measure. Neely has assembled and produced this exciting compilation of the standout musical moments from the third season, resulting in a blast of a listening experience for the fans! Mastered by Stephen Marsh, this is a limited edition release of 2000 units, with super-heroic art design by Dan Goldwasser