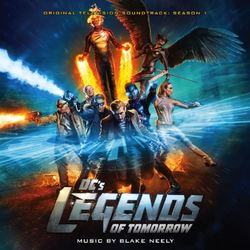 La-La Land Records, DC, Warner Bros. and WaterTower Music present acclaimed composer Blake Neely's original score to the first season of the hit television series DC's Legends of Tomorrow. Composer Neely expands his DC musical landscape with another rich and exciting original score that winningly compliments this thrilling series of time-traveling superheroes and villains. Neely has assembled the finest musical moments from the first season, resulting in a knockout collection of cues fans will love! Produced by Neely and mastered by Stephen Marsh, this is a limited edition release of 3,000 units featuring a note from the composer and heroic art design by Dan Goldwasser.