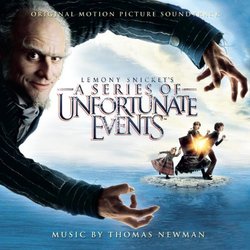 As an album of just under seventy minutes, Lemony Snicket’s A Series of Unfortunate Events covers a good deal over ground that on the whole delivers a refreshingly mature score. Whilst it’s certainly not a break from the kind of output many have come to expect from Thomas Newman, it is certainly a welcome break for a film of this nature.

To those who know Newman’s score to Finding Nemo, A Series of Unfortunate Events is going to seem like fairly familiar territory, and this can be seen as a good or bad thing depending on where you stand. Often we’ve seen Newman asked to deliver simply one thing or another in his music, but it is nice at least to see the composer again getting the chance to fully fuse his most common styles, his penchant for the offbeat and his ever reliable ability to tug at the heartstrings. It serves to be a successfully consistent musical combination on the album.

"The Bad Beginning" is certainly an attention grabbing first track. With the burst of a little giggle we’re greeted to a teaser of "Loverly Spring," a song featured later on the album penned by Newman and Bill Bernstein. The cue halts amusingly to signal a sinister tone before things are allowed to pick and become more playful again. It’s actually a terrific opening cue that lets the listener become quickly accustomed in what to expect from the score as a whole.

It’s in the central the section of the album where Newman begins to play around and have the most fun. "The Marvellous Marriage" for instance, may well be under a minute in length but it is a remarkably fun interlude in the score, and eleven tracks later much the same can be said of the aforementioned "Loverly Spring." The surround cues are certainly varied in their execution, but whether they vary enough from track to track is open to debate. There is a lot of fun to be had however.

Two of the score’s principal themes are introduced in "The Baudelaire Orphans" and "Resilience." It could be said that the latter is Thomas Newman in a nutshell, introducing a theme that reaches its peak at the end of the album in "The Letter that Never Came" where we not only find Newman at his most sentimental, but his most beautiful. Here in closing the film he takes one of the theme, with himself leading the way on the piano, before introducing his typical rich arrangement of strings ending proceedings on a bitter-sweet note. Here where Newman excels, he remains hard to fault in always hitting a desired emotional note.

I do like this score a great deal, more so with every subsequent listen. For his fans A Series of Unfortunate Events paints a healthy portrait of the composer at his most eclectic, however in contrast to this, those wishing for director Brad Silberling to have pushed Newman into exploring new territories will find the music may ultimately leave something to be desired.