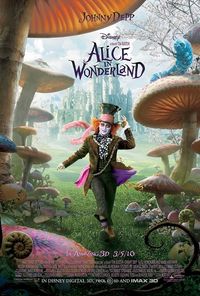 Lewis Carroll's Alice in Wonderland has had numerous film and television adaptations, but one of the most famous ones is the Walt Disney Pictures animated feature from 1951.  Tim Burton - who had recently given us his unique spin on such properties as Charlie and the Chocolate Factory and Sweeney Todd: The Demon Barber of Fleet Street tackled Alice in Wonderland not as a retelling or remake of novel (and the sequel Through the Looking Glass), but rather as a fusion of the two told as a sequel (of sorts) to the first novel.  Now grown up after her (rather traumatic) events in Wonderland as a child, Alice Kingsleigh (Mia Wasikowska) has been suffering nightmares and is convinced that her experience was nothing more than a dream.  Along with her mother, she travels to the wealthy Ascot estate, where everyone knows that Hamish (Leo Bill) is going to propose to her, and Alice is expected to accept.  Alice doesn't conform to the expectations of Victorian society, and her rebellious nature is evident early on. During the party, Alice keeps seems glimpses of a white rabbit in a waistcoast - but no one else seems to see it.  When Hamish makes his grand gesture of proposal, Alice - who is unhappy with the idea of a planned marriag - decides to take a moment and run away, chasing after the rabbit. Inevitably, she falls down a rabbit hole and, after a bit of necessary size readjustment, enters the fantastical world of Underland (which she had misheard as "Wonderland" the first time she visited).

She's met by the White Rabbit (voiced by Michael Sheen), the Dormouse (voiced by Barbara Windsor) and Tweedledee and Tweedledum (Matt Lucas) who explain to her that it has been foretold that Alice will destroy the Jabberwocky on Frabjous Day, thus ending the reign of the Red Queen.  But they're convinced that since she doesn't remember Underland at all, she must be the "wrong Alice", so they take her to the Blue Caterpillar (voiced by Alan Rickman) who informs them that she's "not hardy Alice" - which doesn't really clear it up.  Well, the Red Queen (Helena Bonham Carter) has heard of Alice's return to Underland, and fearing losing her crown, dispatches the Knave of Hearts (Crispin Glover) to find and capture Alice.  She manages to escape, and encounters the Cheshire Cat (voiced by Stephen Fry) who takes her to the Mad Hatter (Johnny Depp), who would love to see the Red Queen lose her power.  The Hatter goes to take Alice to the castle of the White Queen (Anne Hathaway), but allows himself to be captured by the Knave to let Alice escape yet again.  Alice now has to save the Mad Hatter, and decide if she has what it takes to live up to the prophecy and defeat the Jabberwocky and the Red Queen, saving Underland from tyranny.

Overall, Alice in Wonderland is an entertaining but very linear story.  Much of the focus is on Alice, the Red Queen, and the Mad Hatter, and only Alice has any kind of character arc of sorts.  It's foretold from the beginning that she'll fight and defeat the Jabberwocky, so by the time she finally gets around to it, it feels rather expected and we already know the outcome. Alice moves from character to character, situation to situation, without the sense of any real flow to the story.  Wasikowska is decent enough in the titular role, but it's really Carter who steals the show.  Her mannerisms and outlandish behavior makes every scene with her a joy to watch, and she provides some truly funny moments.  As the Mad Hatter, Depp has a bizarre quality that works, but his Scottish accent and mumbling - combined with Carroll's occasionally unintelligible dialogue - makes his performance a challenging one to swallow.

From a visual perspective, Burton was the perfect director for the film.  His vision of Underland brings Carroll's work to vibrant life, popping out on the screen.  Released in theaters in 3D, there's a lot of digital effects and manipulation, which gives the whole thing a sense of hyper-realism.  The art direction seems inspired in part by the 1951 animated feature, and John Tenniel's illustrations from the novel.  In short, it works really well visually.  Musically, composer Danny Elfman delivers a fresh melodic score that sounds like a blend of Black Beauty and his "Serenada Schizophrena" concert work.  Is Alice in Wonderland worth seeing?  Yes, but not for the weak story - see it for the visuals and Helena Bonham Carter.

Released as a three-disc "combo pack" (Blu-ray + DVD + Digital Copy), Alice in Wonderland makes its home video debut a mere three months after opening in theaters.  With such a short time-frame between the releases, it's not surprising that - while it looks and sounds great - there's a shortage of extras to be found on the set.

Primarily shot digitally, Alice in Wonderland gets an exceptionally clean image on Blu-ray.  The colors are generally low saturated, to keep with Dariusz Wolski's drab look of the film - but certain elements, like the reds of the Red Queen and the Mad Hatter's orange hair - definitely pop.  The image is generally sharp and crisp though the visual effects-heavy characters feel a bit smoothed out, lacking in some of the textural quality that one might hope to get from a photorealistic perspective.  But that's a stylistic choice that works, fitting into the hyper-reality of Underland.  Audio is presented as English DTS HD Master Audio 6.1, and it's quite an immersive track.  Matching the 3D theatrical presentation, surrounds are used extensively, thrusting the listener right into the middle of the action.  Dialogue is rendered out a bit clearer than the time I saw the film theatrically, and I was able to understand Depp a bit more the second time around, and Elfman's score gets some nice dynamic range, playing out over the sound effects during some key sequences.

Extras on the Blu-ray are decent, but not what they could have been, if they hadn't rushed to get the film out on home video so quickly after the theatrical release.  "Wonderland Characters" (HD, 28-minutes) gives us six mini-featurettes, looking at the main characters in the film.  "Finding Alice" talks about casting Mia Wasikowska in the lead; "The Mad Hatter" talks about Burton and Depp's shared vision for the wacky character; "The Red Queen" looks at Helena Bonham Carter's unique approach to her bizarre character, and "The White Queen" shares Anne Hathaway's vision with us.  "Time-Lapse: Sculpting the Red Queen" shows us the extensive make-up work that Carter had to undergo every day, and "The Futterwacken" looks at how a dancer who was an internet sensation ended up getting a feature-film body-double role for a small bit at the end of the film.

The only other section of extras is "Making Wonderland" (HD, 19.5-minutes), which is comprised of six more mini-featurettes that give more of a behind-the-scenes look at the production.  "Scoring Wonderland" is a short but sweet look at Danny Elfman's musical approach to the film, including how he came up with the main theme.  "Effecting Wonderland" looks at the complicated visual effects shoot, with Burton using green-screen and motion capture extensively in a film for the first time.  "Stunts of Wonderland" looks at how some of the action sequences were handled, and "Making the Proper Size" looks at the use of CGI enhancement in the film from the subtle (enlarging Johnny Depp's eyes) to the obvious (enlarging the Red Queen's head).  "Cakes of Wonderland" looks at the bakers who had to create the various edible goodies on screen, and "Tea Party Props" similarly explores the culinary talents behind two of the sequences in the film.

There is no commentary (although given Burton's somewhat rambling commentaries in the past, that might not be a bad thing), but oddly missing seems to be anything that ties Burton's vision of Alice in Wonderland to the actual literary sources.  Even a kind of pop-up trivia track explaining where the various ideas originated would have been a welcome addition to the release.  There are no trailers either. Hmm.

Alice in Wonderland is definitely a visual treat, more so than a "well done film".  Its story flaws can easily be overlooked when appreciating the image and audio.  But those hoping for a more substantive experience both during the film and "behind the scenes" might find themselves a bit disappointed.  It's great that the film is offered in a combo-pack form for those who want options on how to view the film, but you might want to consider renting it first before deciding on purchasing it.