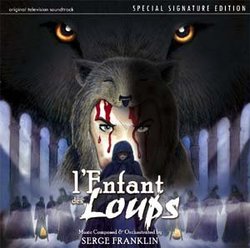 Serge Franklin's epic score for the 1991 French film L'enfant des Loups (The Wolves' Child) was re-released in June 2004 by Lympia.net, featuring previously unreleased music and artwork by Patrick Larme. Franklin is a prolific French composer, whose credits include numerous films and television productions, as L'enfant des Loups was. The CD is also available at www.soundtrackcollector.com. The music was originally released in 1991 in France with the FYSIO Symphony Orchestra and Kuhn's Choir.

The music is classically influenced, with layered string textures and oboe solos making up the majority of the score. The main theme is gorgeous and Franklin uses it throughout the score in many variations and passing it between sections; the chorus even performs it in "Fils et Royaumes" and "O Vos Omnes". The overall feel of L'Enfant des Loups is similar to Joe Hisaishi's Princess Mononoke, with the use of a prominent string theme and choir. Franklin also uses the choir to create a darker, more urgent feel with a deep chanting in Latin ("Dies Irae", "Maledictis"). The use of Latin is a very interesting choice, but gives parts of the score an authentic feel, similar to Alan Menken's score to The Hunchback of Notre Dame.

Franklin uses some unique instrumentation in certain parts of the score, such as the female vocals in "Le Livre des Lumieres" and the clapping and haunting vocals in "Danse des Sacrileges". The unreleased tracks included on this album are not just filler music from the film to add length to the disc, but prominent tracks that add much to the listening experience. The first release opened with "Ecce Como", the third track on the new album. The first two tracks, the prologue and the overture are really one cue divided into two tracks and present the main themes and choral elements in a compact suite, which begins the album well. Another unreleased track, "Vanda and Albin", is towards the end of the album and builds upon the themes in an uplifting, romantic cue.

Unfortunately, the film L'enfant des Loups is not available, at least in the United States, though if the music is anything to judge by, I would love to see it. Franklin's score is epic, thematic, and poignant. The tone of the music does not vary as much as in Princess Mononoke, for example, but the end result, even with the added tracks, is a cohesive score featuring brilliant performances all around.