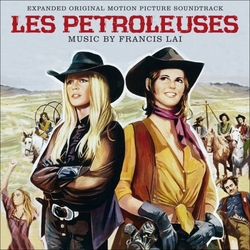 Quartet Records and FGL Productions present the premiere complete edition of two western scores by classic French composer Francis Lai (A Man and a Woman, Love Story, The Bobo, Le Baby-sitter, Bilitis), one of the greatest creators of melodies in film music history.

Les Pétroleuses (aka Frenchie King) is a curious and iconic Spanish-French coproduction directed by Christian-Jacque in 1971, in which women assumed the traditional roles of hard men in the Old West. It starred Claudia Cardinale and Brigitte Bardot as outlaw sisters who inherit a ranch and try to settle down and develop relationships with a neighboring family that includes many brothers. The film was a success, particularly because of the two actresses, and Francis Lai's music was also very successful. The composer, an accordionist born in Nice and musical director for Edith Piaf's last tours, emerged victorious with this western assignment. Lai provides lovely melodies, action music, three beautiful songs and lots of fun!

The soundtrack album of Les pétroleuses was released on LP concurrently with the film and reissued on CD only in Japan in 1995, making it now a very hard-to-find collector's item. For this new release, conceived by Stéphane Lerouge and supervised by the composer, we offer the newly mastered album sourced from first-generation master tapes, and have also included six bonus tracks. Dans la poussičre du soleil was only released in digital format some years ago, so this is the premiere physical edition in any form.